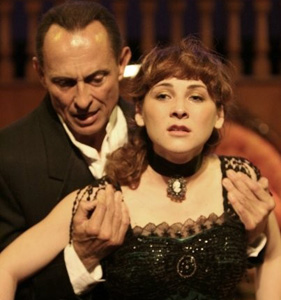 Michael Hegedus as Dracula and Chase McKenna as his Mina
(Credit: Michael Lamont)

“The House of Besarab,” directed by Terance Duddy, is a fantastic play adapted from the classic Bram Stroker novel Dracula. This intoxicating, horrifying ancient love story will confound you as you decide which of the actors to follow through Count Dracula’s enchanting castle.

The play truly begins as you enter the Hollywood American Legion Theatre, where a gypsy woman (Miliza Milo) hands you a rosary-style necklace, after which you are met by the escaped mental patient Renfield (David Himes), who wakes Count Dracula (Michael Hegedus) from his tomb.

Dracula’s passionate and ghoulish appearance strikes anxiety into people who have failed to display their cross; his mysterious aura along with his voluptuous vixens, Cruza and Riva (Megan Harwick and Sara Spink), make it nearly impossible not to tag along into the massive auditorium. It is in this room, replete with antique furniture, bowls of potions and goblets filled with blood, that the audience is transported to Dracula’s1895 Transylvanian castle. Here, in Count Dracula’s Castle, this dark place where miracles of the occult occur, we meet the chained villager Slava (Jason Parson) whom the pernicious Dracula is turning into a wolfman.

However, if one chooses to remain in the atrium, they will be met by the Count’s nervous guests: the scholarly vampire hunter Dr. Van Helsing (Travis Michael Holder), Renfield’s former institution proprietor Dr. Seward (Terra Shelman) and the young lovers Jonathan Harker (Dane Bowman) and Mina (Chase McKenna).

“The House of Besarab” at times deflates the torturous Dracula and exhibits a tortured man – one afflicted by the pains of loneliness, intense heartache and demonic craze. Hegedus’ Dracula is so evil, it’s fantastic. He almost speaks in curses, and his accent is part of an incredibly passionate performance.