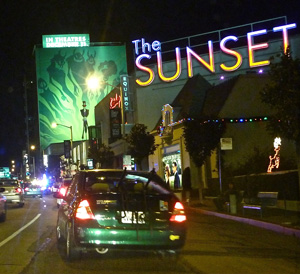 Famous streets litter the globe. From the Champs-Élysées to Broadway, these thoroughfares have grown to historic levels not because of the asphalt below, but what stood upon them. The life that developed in these small patches was so significant that the actual land below their feet took on a meaning of its own.

Los Angeles is no exception, boasting one of the world’s most famous streets, a place where people travel from around the world just to feel the energy of something honest and pure. The Sunset Strip has been home to legend and lore for over half a century, and now, as the world changes yet again, the street known for shaping the way we listen to music is also facing a shift.

Since the 1920s, this storied mile and a half of concrete and palm trees has been a refuge for Hollywood elite and those who have done things their own way. When the rest of the world was regulating the way they lived, even with Prohibition, the Sunset Strip offered a place where people could go and be free. Having no jurisdiction over the area now called West Hollywood, the City of Los Angeles left it up to the sheriff to run things – and they handled how they saw fit.

With the entertainment industry flourishing, the street became alive with clubs, restaurants and music. This oasis for entertainment is what laid the groundwork for the ’60s and ’70s when clubs like the Whisky A Go Go and Roxy Theatre were born. With music coming from all sides of Los Angeles, and the hills behind and below, the street filled with performers of the day. There was little to stop the creative explosion that took over this street … and even gave way to the infamous riot on the Sunset Strip in 1966.

But, times have changed. With the weakening of the music industry, expense accounts have dried up and so have the budgets for live shows, the staple of this street. First the Coconut Teaser fell by the wayside, and then Tower Records closed up shop. The historic Sunset Strip went from a mile and a half to about four blocks in a matter of years. With the rumored closing of the KeyClub at the end of November, it seems as though this playground for Hollywood is drying up; or is it just changing to fit the times?

To those who say the lack of traffic is solely because of the economy, Nic Adler, owner of the Roxy Theatre, offers something a little deeper.

“West Hollywood has an aging population. We don’t have what we’ve had before, which was people living right on the street. That’s the difference between Echo Park and Silver Lake. The dude in the band lives down the street. So we are a little geographically challenged. The people around us aren’t actively participating with us,” he says.

Facing the fact that the people who created the strip are now entering their golden years, it seems that they are taking the street with them. Property below Sunset ranges in the low millions, while above homes can easily reach $15 million – far from the demographic that partakes in $10 rock shows on a regular basis.

But the clubs are fighting back.

The Viper Room and Roxy Theatre have partnered up to offer 2-for-1 shows. If you buy a ticket at one venue, you could get into a show at the other. Drink specials are commonplace now, and social networking has become an integral tool in the relevance of these venues.

“You can’t sit and be idle, you have to be on the cutting edge. That’s what makes Sunset special. You always have the hottest bands here from all areas of music; not just one thing,” Adler says.

Adler has really gotten the Roxy up and going with Twitter, already boasting about 20,000 followers.

The city has even come on board to support this little piece of real estate. In the fall, over 10,000 people turned up for the Sunset Strip Music Festival, sponsored by the Sunset Business Association. The SSBA was created in 2001 to provide public outreach and marketing and is comprised of the owners that have set up shop along the street from Crescent Heights to Doheny Drive.

With the success of the SSMF and the clubs joining forces, it seems that there is hope for the street that has done so much for so many.

“We are going through a Renaissance on the Sunset Strip,” comments Adler. “Anytime the street became about one thing, it would change. It has always been about a mix of everything, and we’re starting to see some new things come up on the Strip like Soho House and Boa. You’re finding that mix again.”

The mix may be coming back, but the alleged closing of the KeyClub is a reminder that things are different. The inability of the music industry to function like it has since its incarnation could possibly be one of the great indications that times are changing. Now it’s just a matter of seeing how the ones running the show handle the weight of things to come.