The Garza Twins: Double Your Pleasure in Transylmania 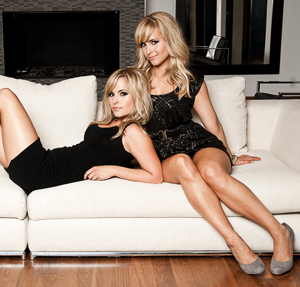 For Natalie and Nicole Garza, comedy is a family affair.

“We make people laugh just by being us,” says Nicole, the twin’s unofficial spokesman and the chattier of the two. “There’s no filter, and comedy just comes naturally.”

In Transylmania, the sisters play identical twins (Go figure!) who embark on a madcap semester abroad at Transylvania’s Razvan University. But with leather-clad professors and a Dracula-style castle that doubles as a lecture hall, the twins soon realize that Razvan is not the esteemed institution it promoted in the brochure.

The movie shot on location in Romania, and for the sisters, it was their first visit to the country.

“At first we were like, Romania! There’s no such thing!” jokes Nicole. “We couldn’t even tell you where it was on a map.”

A longtime favorite among international filmmakers, directors David and Scott Hillenbrand took full advantage of Romania’s rich historical monuments and shot much of the film at Castle Corvin in the Transylvanian Alps, which proved to be problematic for the ultra-modern Garza twins.

“Romania is a little behind,” says Nicole. “We had no Internet. No TV. It was literally just the cast in one hotel, and all we had to do was hang out with each other.”

They may have been frustrated by Romania’s lack of 21st century amenities, but the Garza twins know what it’s like to have nothing. Raised by their grandmother in a poor section of Miami, they grew up without the everyday luxuries most children take for granted. “We went to a school where no one spoke English, and we didn’t speak Spanish,” says Nicole. “So it was difficult to break out of that.”

The sisters may have come from limited means, but their ambitions and goals were anything but small. Almost from the time they were born, they knew they wanted to act. “We made a pact when we were 10,” Nicole reminisces, “that when we turned 18 we would move to L.A.”

The twins kept to their word, and a few months after their 18th birthday, they headed to Hollywood. How they arrived there, is a different story.

“We sold our grandma’s car and used the money to buy a couple of Greyhound tickets,” admits Nicole.

When most actors struggle for years, oftentimes decades, before receiving their big break, Natalie and Nicole watched success fall into their laps. They booked a few national commercials and even had a development deal for their own television show with ABC. However, it would all prove to be short-lived.

“The executive who signed us for our development deal at ABC was let go, and then our deal expired,” Nicole laments. “By that time we had spent all our money.”

With no money in their pockets, the sisters waited tables to make ends meet. They still went on auditions from time to time but found that they worked better as a pair. The number of auditions that required twins, however, were few and far between.

Then one day, they heard Doublemint Gum was casting twins for a series of new television and print ads. The girls called up their manager and soon met with the casting agent. Three auditions later, and they were the new Doublemint Twins.

“We got the job because we were the only twins who knew how to ride a bike,” Natalie says.

With their faces splashed all across television and magazines, it wasn’t long before Hollywood came knocking. Since their days as the Doublemint Twins, Natalie and Nicole have landed guest spots on several television shows, including “The O.C.,” “How I Met Your Mother” and “Gilmore Girls.”

Transylmania is their first movie for the Hillenbrand brothers, who are known for their frat boy comedies. Since the directors were also bonded by blood, were the sisters given any preferential treatment on set?

“No more than any of the other actors,” admits Natalie. “They made us very comfortable and let us be us. There was a lot of improvisation.”

Now that they have a few movies under their belt, in addition to a number of commercial and television credits, what’s next for Natalie and Nicole Garza?

“We have some offers, mostly on the reality side, but we’re not sure if we want to do that,” says Natalie.

“We still want to work in movies,” Nicole interrupts.

Transylmania releases in theaters Dec. 4.
Article posted on 12/2/2009
This article has been viewed 9587 times.