Up in the Air: In Flight with Jason Reitman 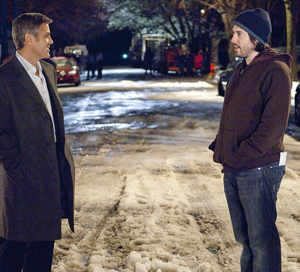 George Clooney and Jason Reitman on the set of Up in the Air
(Credit: Dale Robinette)

Unlike Ryan Bingham, the corporate anti-hero in his latest film Up in the Air, director Jason Reitman has had few occasions when he has had to fire someone.

“I had to fire a 7-year-old girl in a commercial once,” Reitman recalls of his days as a lowly commercial director. “We sent her to lunch, and then we sent her home.”

In Up in the Air, George Clooney stars as the aforementioned Bingham, a corporate downsizer who, after years spent living inside airports, hotels and rental cars, suddenly finds himself grounded. Now, well into middle age, Ryan realizes he has spent the majority of his adult life alone and in transit, and contemplates what it might mean to have an actual home.

“Instead of going from door to door, he goes from hub to hub,” Reitman notes. “Once Ryan has his epiphany, he realizes the value of human connection.”

Although a relative newcomer to Hollywood (The Academy Award-winning Juno was only his second feature.), Reitman had no trouble getting Clooney to play Bingham.

“He said, ‘I read it. It’s great. I’m in,’” Reitman recalls. “Of course, I had written it with him in mind, but I wasn’t presumptuous enough to think that George Clooney was going to do my movie.”

It’s no wonder that Clooney agreed to do the film. As no stranger to Oscar season, there’s already talk that Up in the Air will sweep the nominations come January.

But with only three films to his credit, does Reitman feel that he may have hit his career apex a bit early? In typical fashion, the director is as modest as one can expect.

“The morning I found out about Juno was one of the great moments in my life, and if I had a moment like that again, I would cherish it,” says Reitman.