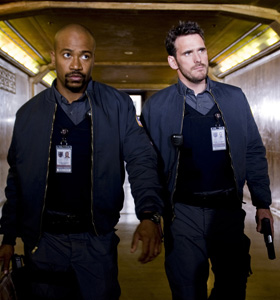 Columbus Short is either an incredibly lucky guy, an extremely talented actor or, most likely, he’s a combination of both luck and talent.

The actor, dancer and musician who got his first break in the dance flick Stomp the Yard has had a very illustrious career appearing in hit flicks like Save the Last Dance 2, Quarantine, Whiteout, This Christmas and the musical drama Cadillac Records with Beyoncé Knowles.

“It’s a blessing because I was on that audition grind four to five times a week,” says the 27-year-old Missouri native.

With several projects in the pipeline, including the John Singleton movie Tulia with Halle Berry and Billy Bob Thornton and a Stomp the Yard sequel, Short currently stars in Armored, an action-packed thriller about a crew of armored truck guards who plan to rob their own security firm.

“It’s a very smart movie, and I fought to get the part,” he says. “It juxtaposes drama and action in a believable way with plenty of rock ’em, sock ’em and blow ’em up moments, as well as emotionally intense scenes.”

“You just hope to be able to act and get paid to do it,” Short says. “I hope I can continue to be gratified as I was with this movie. It has changed the way I thought about what I do, and it brings me back to why I do it and also why I chose this path. It’s not about monetary gain. I like to do projects that are artistic and gratify me and keep me afloat.”