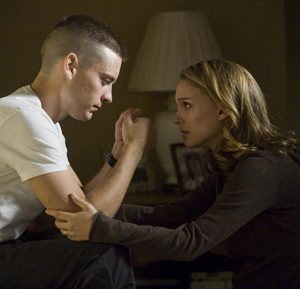 When I first heard about Brothers, I knew audiences would be in for a real treat. But I didn’t know the half of it.

The drama stars Natalie Portman as Grace. She’s a devoted mother of two little girls and the wife of Sam (Tobey Maguire). Her family is about to lose its patriarch to the rigors of the war in Afghanistan. Sam is headed overseas for another tour of duty.

While this local hero is striving to be the best he can be, his kid brother, Tommy (Jake Gyllenhaal), is a whole other ball of wax. Just days before Sam ships off, Tommy is released from jail for bank robbery. Sam’s send-off is further complicated by a disapproving veteran father (Sam Shepard) who thinks that Tommy is a slacker and makes sure to tell him so every chance he gets.

Shortly after deployment, Sam and his company are shot down by enemy fire. News gets back to Grace that her husband is dead. This sets her on the difficult journey of having to pick up the pieces and care after her daughters – even though her heart is broken. Seeing the pain of his loved ones forces Tommy to step up and be a better man. He rallies a group of friends together to do the necessary repairs on Grace’s kitchen. He even becomes a trusted friend and confidante to her and his nieces.

But just when it appears that the family is regaining its stride, news arrives that Sam is alive. He returns home – but he’s changed. His wife notices, his daughters notice. Even his emotionally distant father is aware. But no one realizes the depth of the horrors that Sam endured until he finally explodes with anger.

Brothers is an excellent display of young talent. For those of us who grew up watching each of its stars, it’s a true pleasure to see how far each has advanced creatively. Portman is stunning and has a glow of subtle elegance that shines on screen. Gyllenhaal is both sexy and sympathetic; he takes the same elements that made him so charming in Brokeback Mountain and elevates them in this latest performance. But it’s Maguire who is truly outstanding. In the 15 or so years that I’ve watched him act, I’ve never seen his range go beyond affable and lovable. He has, however, surpassed expectation in Brothers, giving a performance so broad that he is a shoo-in for every accolade available to an actor.