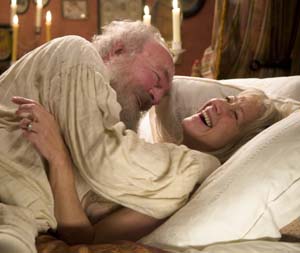 One of my film teachers once said that the historical drama is the ultimate in indie. For the most part, these films are made for a very specific, intellectual audience, and they tend to do better on the film festival circuit than in the mainstream box office.

And to tell the truth, this really does seem to be the case in real life. There have been a whole slew of period films recently, and apart from maybe Coco Before Chanel, none of them have really garnered a great deal of media attention. In fact, the last historical drama that’s made a big splash was probably Sofia Coppola’s Marie Antoinette in 2006 and not for anything good.

But there are historical dramas that really shouldn’t be overlooked. Such is the case with Michael Hoffman’s The Last Station.

The film chronicles the life of the rapidly declining Leo Tolstoy (already a hero for the working class in Russia) and the changing relationships he has with his wife, Sofya (Dame Helen Mirren), his children and his most trusted friend, Vladimir Chertkov (Paul Giamatti). While Tolstoy (Christopher Plummer) is undoubtedly madly in love with his wife, he struggles with the choice between making her happy and choosing the aristocratic lifestyle they’ve been born into, or giving everything up in favor of poverty, celibacy and vegetarianism – in short, becoming the perfect disciple of his own philosophies.

Similarly, Tolstoy’s secretary and a promising follower of Tolstoyism, Valentin Bulgakov (James McAvoy), is struggling with choosing a life of self denial or celebrating the love that Tolstoy preaches.

With an all-star cast, the acting is moving, without being dramatically overbearing, and balances drama and comedy expertly. It’s subtle, yet affecting, and watching Helen Mirren make crowing noises at Christopher Plummer is probably the sweetest thing I’ve ever seen.

In places, the pacing in The Last Station is a little slow, but when the story starts to lag, it’s beautifully shot and visually interesting. In fact, my main beef with the film is that while it’s supposed to be set in Russia, all of the characters speak with English accents (well, except for Giamatti, who doesn’t even try and just sounds like an American). But that’s a small price to pay for such a touching story.