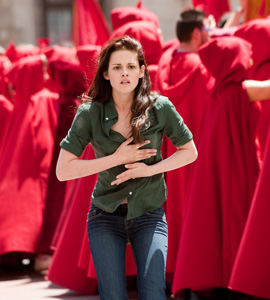 The Universe has quite the sense of humor. When The Dark Knight blew all the box office records out of the water, I rejoiced, and my faith in the moviegoing public had been renewed. But then The Twilight Saga rolled in, and the second installment, New Moon, a film with a fraction of the depth and sophistication, broke almost all of the box office records that The Dark Knight set.

Great for them. I haven’t read the books, and I’ve only seen the first film, which will probably make me look very hypocritical. However, being a massive hypocrite who is constantly making an ass of myself because I don’t have the slightest idea what I’m talking about is something I happen to be proficiently talented at.

After New Moon’s success, I took some time between head slaps to break down what I thought was at the core of its content that has so many women (That’s right, it’s not just teens.) hooked like drug addicts. After thinking about it for maybe five minutes or so, I came to the conclusion that when you strip everything away, Twilight is ultimately about a woman’s obsession with being flipped on a dude for the first time – more specifically, a dude who’s bad for them.

There’s nothing more exciting for women than hooking up with the “dangerous guy.” Safe is not fun. When you combine that with the idea of being a teenage girl who hasn’t been hurt yet and corrupted with all the stuff about men they’re going to complain to their girlfriends about later on in life, you’ve got a winner.

Armed with this knowledge, I’m going to help the rest of Hollywood exploit this and cash in on it. Below, I’ve suggested three movie franchises we can re-energize by giving them the “Twilight treatment.” I don’t see any reason to risk any more money when we have this no-brainer story formula to work with.

It’s time to throw out all the scripts in development and write new ones loaded with teenage sexual angst. Years from now, I will no doubt be applauded for my expert grasp of this genre.

A teenage Ellen Ripley (played in the original franchise by Sigourney Weaver) lives with her parents on a spaceship that’s on a mission to another universe. For some strange reason, all of the other crewmembers have brought their teenagers along with them, and Ellen falls for Steve, the “dangerous guy.” Unfortunately, everyone on board is a Mormon, so Ripley and Steve can’t have sex.

Next thing you know, the ship is invaded by facehuggers who start planting aliens in everyone’s chest, and Ripley and Steve have to fight through the aliens to save their love. At the end when they are the last two left, they decide to have sex. As they’re both disrobing, suddenly, Steve starts to convulse and an alien bursts out of his chest. Ripley is forced to grab a flamethrower and incinerate him and the alien.

The story focuses on Jenny, one of four teenagers who are being trained to be the new ghostbusters. The other three are all dudes, and it isn’t long before Jenny falls for Howard, the “dangerous guy” out of them. The only problem is, they’re all Mormons, so they can’t have sex.

Jenny and Howard have to put their love on hold to fight off an onslaught of ghosts that threaten to destroy New York. At the end when the ghosts have been defeated, Jenny and Howard decide to have sex, but as they’re both disrobing, Slimer bursts through the wall and slimes both of them.

A group of teenagers are vacationing on a mysterious island inhabited by prehistoric creatures. Why? I have no clue.

Ann wanders off and is kidnapped by a huge “dangerous” teenage gorilla named Kong. Although she’s scared at first, she soon warms up to him and they both fall in love. As it turns out, both Ann and Kong are Mormons, so they can’t have sex.

The rest of the group comes looking for her, rescues her and manages to kidnap Kong and get him back to the States. Back in NYC, Kong escapes, grabs Ann and ascends to the top of the Empire State Building.

Once at the top they give in to young love and decide to have sex. Unfortunately, as Ann is disrobing, fighter planes come out of nowhere and blast Kong off the side of the building.

Send feedback to screenshots@campuscircle.net.
Article posted on 12/2/2009
This article has been viewed 1630 times.