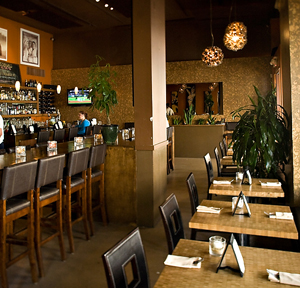 Usually when you think of downtown Santa Monica, you think Third Street Promenade with all of the shops and restaurants. Some are high end, some are homey, but none really marry the two. There are a few restaurants here and there that are fancy like Boa and Sushi Roku, but those are not places I would suggest visiting often unless you’re made of money.

Luckily, two restaurateurs found the balance of quality food at reasonable prices right in the heart of downtown Santa Monica. Enter the Yard, a gastropub just across from the sands of Santa Monica beach.

As I walked through the double doors, the Yard was brimming with conversations from guests throughout the place, in fact, it was completely full – on a Tuesday night. Opened in March 2008, the Yard is experiencing a surge in patronage, probably due to the grand re-opening in mid-November with a new chef at the helm.

From the minute I tasted my Blood Orange Martini, I began to understand why the Yard, with its neighborhood bar atmosphere, is likely to stay busy. Starting off with drinks, the menu features an impressive eight draft beer selections and 30 bottled beers.

My aforementioned martini is regularly on the menu, but they also feature Cocktails of the Week, with great pairings of fresh fruit and liqueurs that are not often used. The Cucumber Martini with fresh puréed cucumbers and lime was on a few tables, as was the draft beer AleSmith X from San Diego and another popular Pilsner, Prima Pils.

The fare at the Yard is very conducive to sharing because of its tapas style menu. It features a wide array of options that blend high-end items, like the sweet and spicy Duck Confit Salad and the Chocolate Persimmon Salad, with simple, familiar items like Ain’t No Thang Chicken Wings and Pulled Pork Sliders. My favorite was the special of the night, Crisp Pork Belly with Tater Tots.

Other must-tastes are the exquisite Pan Seared Diver Scallops with Mandarin Artichoke, Ginger Date Vinaigrette and the delicious Grilled Baby Back Ribs with Pear Salad. The 8oz burger, ground with three different types of beef, was so juicy that I wondered if there was butter injected in there, and the bread was fresh as can be.

The chef - Christopher “CJ” Jacobson, from Bravo’ s “Top Chef” - carefully created the approachable menu keeping in mind the spirit of the beach city. Previously working at Venice’s organic restaurant AXE, his love for fresh ingredients and supporting the local farmers market is evident. The Chocolate Persimmon Salad is hard to come by on Tuesdays because Wednesdays is the day Jacobson shops for ingredients.

It always shows in the quality and taste of the food when the person preparing it truly enjoys what they do. On the Yard’s Web site, Jacobson has a blog where he shares his random rants and recipes, and he has even produced videos for videojug.com on the art and technique of classic American cuisine.

I’m not one for desserts, but it’s hard for me to pass on chocolate, and the ramekin baked Chocolate Chip Pecan Cookie a la mode was just what I needed. Next time I’ll try Chef CJ’s favorite, the Apple and Pomegranate Galette with Dates, Walnuts and a Gruyere cheese crust, finished off with whipped cream. Sounds delicious and healthy, doesn’t it?

The Yard also has weekly themed nights and promotions, featuring live jazz, wine and cheese tastings, as well as local DJ nights on the weekends.

Date Night
Some first choices for dining in L.A. after last call at the bar
1,667 views