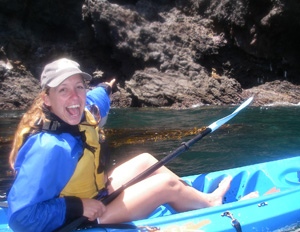 When picturing an island getaway it’s easy to imagine lying on the beaches of Hawaii or strolling the sands of Cancún. But did you know there are islands much closer, about an hour off the coast of Ventura or Oxnard, waiting to be explored? Once discovered, the Channel Islands are your ticket to a lifetime of nearby adventure travel.

While most Californians know about (Santa) Catalina, this is only one of the eight islands, and the only one with a significant permanent population in the town of Avalon. Camping is also available at Two Harbors, whereas camping is your only option on the other islands.

The eight Channel Islands are: Anacapa, San Miguel, Santa Barbara, Santa Cruz, Santa Rosa, San Clemente, San Nicolas and Santa Catalina. In 1980, San Miguel, Santa Rosa, Santa Cruz, Anacapa and Santa Barbara were made into the Channel Islands National Park. You can camp year-round on all five islands – there is one National Park Service-managed campground on each island – for only $15 per night/per site. Reservations can be made at nps.gov/chis.

Luckily, arranging transportation is a breeze. Island Packers (1691 Spinnaker Dr., Ventura; islandpackers.com) provides your speedy and fun ride to and from any of the islands. While trips to Anacapa and Santa Cruz can be made year-round, those to Santa Barbara, Santa Rosa and San Miguel run May through October. Island Packers also offers Pacific Grey Whale (December through March) and Blue and Humpback Whale (June through September) watching excursions. Nature lovers may also visit an island for the day, or take specialty cruises, like the Tidepool Exploring trip on West Anacapa (November through April) or the North Shore Wildlife Cruise (April through November), which is narrated and winds along the rugged north coast of Anacapa or Santa Cruz.

On your way over, you’re bound to see dolphins, sea lions, seals and all sorts of marine life. On my trip to Santa Cruz, to the delight of spectators, the dolphins played in the boat’s wake and raced alongside its bow, as if only to entertain us.

Santa Cruz is said to be the most accessible for beginners (like me!). The boat drops campers and visitors off at Scorpion Cove. After being welcomed by the park ranger, you’re free to explore the island or set up your campsite, which is a half-mile from the landing. You must carry in everything you need; there is no store. The food and gear you bring is the food and gear you have for your entire stay.

Because there are foxes and mice that have become accustomed to stealing food, the campsite comes equipped with food lockers in which you are advised to store everything edible while you’re away. Potable water and Porta-Potties are also at the site.

Santa Cruz is the largest island in the national park, and it is said to resemble a miniature of what Southern California looked like more than 100 years ago. If you opt for the island tour with a guide, which leaves every day after the boat pulls in, you’ll learn that the Channel Islands rose from the ocean millions of years ago, born of plate tectonics, volcanic activity and fluctuating sea levels. San Miguel, Santa Rosa, Santa Cruz and Anacapa Islands were once joined, but over time, as sea levels rose, the four separate islands were created.

If you’d like to strike out on your own, there are maps of various hikes you can take, ranging from a half-mile to 15.5 miles roundtrip. The eight islands and their waters are home to more than 2,000 species of animal and plants – 145 are not found anywhere else on Earth – which makes scuba diving and snorkeling awesome.

But the most fun to be had on Santa Cruz is sea kayaking. Sign up with Santa Barbara Adventure Company (SBAdventureco.com) and choose from a variety of different excursions. One of their newest offerings is the Sea Cave Kayak Adventure.

First, you’ll get a brief lesson from your guide (ours, Jen, combined a sweet sense of compassion without easing up on the challenge). If you’re strong and athletic, going solo is advised. If you’re not, doubling up in a two-person kayak can be less rigorous and more fun.

Next, you’ll paddle around Scorpion Cove, enter dark caves, taste kelp, navigate the tides and gaze at some of the most breathtaking scenery ever. The most exhilarating part occurs when your guide sets you up to travel down a narrow corridor between two walls of rock. Think rollercoaster, without the track!

During 2010, Channel Island National Park celebrates its 30th anniversary as the nation’s 40th national park. Isn’t it about time you experience some nearby island adventure?