The Misfortunates: That Family Who Everyone Knows 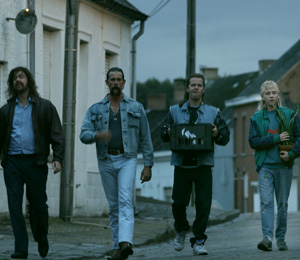 It’s the name that first really catches your eye: The Misfortunates. It’s not even a real word, but a grammatically incorrect way of describing that family who everyone knows.

You know, the boy you went to school with or the father you met at the bar and who spilled his guts out to you. In every town in every country in the world, there is that family whose yelling wakes you from your restful slumber and whose garbage spills onto your yard week after week.

“Although people look down upon them, they have this honor, which is really touching,” says Belgian writer-director Felix Van Groeningen about such a family in his latest film. “It’s a story where you have to make decisions that really hurt.”

The Strobbes are this family. Gunther is our 13-year-old protagonist who is being raised by his smoking, drinking, cursing and fornicating father and uncles. Marcel is the local postman as well as Gunther’s dad. Gunther’s mother left them when he was a baby, and his father refuses to reference her as anything other than that “filthy whore.”

His hotheaded Uncle Petrol is only eight years older than Gunther and lives for the thrill of motorcycles, girls and drinking. Uncle Beefcake is the gambling brother whose addiction gets their mother’s television repossessed. Finally, lucky Uncle Koen fathers many children and wins contests to pay for all of them.

They are a handful, and it takes a firm, focused authority to keep things moving.

“It was fantastic,” enthuses Van Groeningen about the energy on set with the talented group of actors. “Even six months before we started shooting, everyone was excited about it. Everybody was looking forward to shooting this film, which has never happened to me before. They were more excited than me. They were like a bunch of hungry dogs. It pushed me to push them even farther, to go every day one step further.”

This is Van Groeningen’s third feature film. Adapted from a novel by Dimitri Verhulst, The Misfortunates is what the elder Strobbes are and what the young Gunther does not want to become: an unfortunate nobody with few ambitions and no regard for proper behavior.

Because of its nitty-gritty, intensely poetic nature, much of the film is shot in handheld, a feature that, according to this director, is “able to let the energy of the actors dominate, that’s the most important thing. It made sense for me to use it, to get the feeling that you would be part of this family.”

The people, the Strobbes, the misfortunate characters carry the film. More than anything, the fate of the film rests on the role of young Gunther, who acts as our protagonist, narrator and tour guide for the majority of the 108 minutes.

Van Groeningen saw many young actors, but is was 14-year-old Kenneth Vanbaeden who caught his eye early into the audition process. Though Vanbaeden had no previous acting experience, he portrays Gunther with a natural ease and level of professionalism not found in many young thespians.

“I thought he did an interesting job with the role, but it took me a while to realize that he was right for it,” admits the director about the shy boy who used to stammer just months before casting. “What is very strange is that he has this way of concentrating. When you ask him to do something, he concentrates, and he understands what you want from him. You can ask him to start crying, and he’ll do it. When you tell him he can stop, he just cries harder.”

The crew shot The Misfortunates in only 35 days of principal photography and on location in … well in what is supposed to be Reeveerdegem, a fictional village near the Belgian town of Aalst. In fact, Wanzele, Bavegem, Idegem and Erpe-Mere were used as shooting locations to create the scenic beauty that is essential to the story.

And what a story it is, one of unexpected romance, humor and even minute tragedy. As co-writer, Van Groeningen is used to directing his own original work based on screenplays that he finds in his head, though he admits he does not prefer writing alone.

“I realized that I always need to be writing with someone,” he says with total sincerity. “I really love writing because the film gets made in my head. I think it’s a time to make it mine.”

Though it is based on a work of fictional literature, the film version sets itself apart.

“This film has its own logic,” Van Groeningen says. “It is completely different from the book, and it has its own structure. The heart and spirit of the book is in the film.”

The Misfortunates releases in select theaters Dec. 11.
Article posted on 12/4/2009
This article has been viewed 2386 times.

Interviews
Lily James and Sebastian Stan find a real relationship at the heart of 'Pam & Tommy'
150 views
Interviews
Ricky Gervais knew people would be mad about his new Netflix special. He did it anyway
767 views

Interviews
The star of Oscar-nominated 'Flee' gives his first interview: 'I wanted my story to be seen'
1,147 views

Interviews
'Crazy Rich Asians' made Henry Golding a star. Now he's showing Hollywood everything he can do
837 views