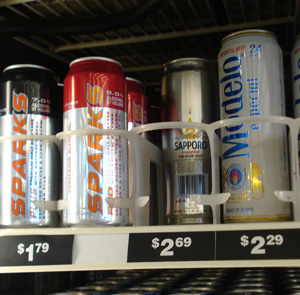 On Nov. 12, the Food and Drug Administration contacted approximately 30 manufacturers of caffeinated alcoholic beverages, informing that it would be looking into their products with regard to the use of caffeine as a safe, legal additive. Section 402 of the Federal Food, Drug, and Cosmetic Act requires that any food additive not previously approved, or confirmed as a substance Generally Recognized As Safe (GRAS), be deemed illegal, making any product containing such an additive subject to action or even discontinuation.

With caffeine only previously approved as a controlled substance for use in cola, at a ratio of 200 parts per million, the FDA is presently looking into whether caffeine as an additive is in fact GRAS, to the extent that it may be consumed in combination with alcohol.

Upon contact, the FDA requested that each manufacturer supply evidence that such a combination would in fact be safe for consumption, and noted that if such evidence of GRAS status or approval were not supplied in favor of caffeine within 30 days of notification, the FDA would begin taking action to remove any products not deemed safe from the market. Presently, the FDA states on its Web site that, “By law, any person can make a GRAS determination but that determination must meet the GRAS criteria for safety and general recognition.” Determination of GRAS status includes “a consideration of the probable consumption of the ingredient, [and] the cumulative effect of the ingredient in the diet” (FDA).

Liqueurs flavored with coffee are presently not under examination, likely due to the marketing of such products to an adult audience, and the decreased probability that such products are consumed in mass quantity, as is the case with caffeinated malt beverages.

Manufacturers like MillerCoors LLC and Anheuser-Busch Companies, Inc. made news in 2008 when products labeled as alcoholic energy drinks, marketing alcohol as the additive, were attacked by attorneys general across the country for their parent companies’ apparent advertising appeal to an underage market. As a result, MillerCoors had agreed to pull Sparks from shelves by January 2009, reformulating it so that it would become a malt beverage free of caffeine or additives promoted for their energy-boosting effects. Without Sparks, the availability of alcoholic energy drink product was reduced by an alleged 85 percent.

Earlier in 2008, Anheuser-Busch agreed to pull and reformulate Tilt and Bud Extra, sans caffeine and guarana, after being accused by attorneys general in 11 states – including California – of marketing to an underage audience, despite having “received all necessary federal and state agency approvals” (Portland Business Journal).

The present investigation by the FDA results from a letter signed by 19 attorneys general, dated Sep. 25, 2009, and partially results from a claim by attorneys general in Connecticut, Utah and Guam, who, in a letter dated Sept. 21, 2009, cited information suggesting that as many as 28 percent of U.S. college students have consumed a combination of alcohol and caffeine. In this letter, it was also suggested that those who combine the two are more likely to consume greater amounts of alcohol and develop a dependence on drugs later in life.

The battle against the combination of alcohol and caffeine is not the first effort to separate youth and adult markets in the use of potentially harmful substances for some of those currently involved. In 2007, 19 attorneys general collaboratively urged Anheuser-Busch to rethink its advertising campaign for alcoholic energy drink Spykes, which was later pulled.

The immediate safety concern, however, which involves the current link between alcohol and caffeine as additive, relates to the cardiovascular or neurological risk involved with high caffeine consumption, and as the attorneys general of Connecticut, Utah and Guam suggest, experimental studies related to the combined consumption of caffeine and alcohol have not tested the effects of amounts that would be realistically consumed in a setting that promotes binge drinking (e.g., college). On its own, caffeine has been suggested by a number of studies to promote heart arrhythmia, including one recent study by Professor Anna Vittoria Mattioli of the University of Modena, Italy, in which caffeine was linked to atrial fibrillation.