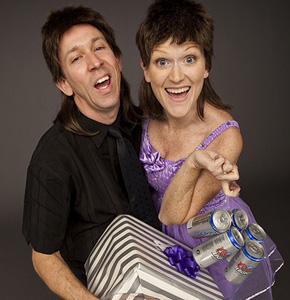 There once was a tiny Groundling, no bigger than an action figure. But he ran away after his stage debut, and so, attempting to honor the giant of a man, the Groundlings present a show dedicated to the mini-actor. As each actor remembers the finer points of his character, you can see him or her physically strain to contain the chuckles.

Directed by Jim Cashman, this show is brilliant. I must confess, as a Groundlings addict for close to two years now, this is one of the funnier sets, even though it only showcases six members: Scott Beehner, Tim Brennen, Jill Matson-Sachoff, Michael Naughton, Lisa Schurga and Alex Staggs.

“You Had Me at Hello” is comedic for its awkwardness, as Beehner and Naughton unintentionally lock arms at a video rental store and realize they actually like the intimacy. In “Who, What, Where” a stereotypical absent-minded professor accuses everybody of stealing from him when he can’t find items (that are right under his nose).

Matson-Sachoff and Schurga are “Powerful Women” who, after finishing their empowerment seminar, can’t muster up the courage to ask for what they want at the coffee shop. “Table 18” gives the Groundlings’ signature nod to low-class behavior when unruly wedding crashers cause a stir. The subject of “Tuesday Night Meeting” alone is hilarious: men with women’s names.

Yet again the Groundlings deliver skits that are as funny for their written and physical comedy as they are for their ability to make you uncomfortable (in a good way) and cross socially unacceptable lines.