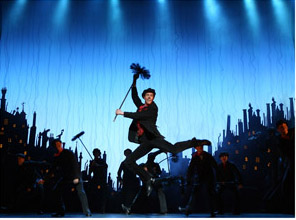 Oh, Mary Poppins. Your ability to get things done fast and right, coupled with your wit and self-assuredness, makes you instantly likeable, to both kids and adults alike.

This is a Disney production, so the costumes are colorful and elaborate and the stage design beautifully detailed and constructed. The performers are top-notch, too – from the young and mischievous Jane and Michael (either Katie Balen or Bailey Grey and Bryce Baldwin or Carter Thomas) to the grumpy and stern father, George Banks (Karl Kenzler).

Perhaps the liveliest of characters is Bert, the chimney sweep, played by Gavin Lee. During “Step in Time,” he, as do about 20 other sweeps, put their fancy footwork on display. Tapping to the tune, the audience follows Bert as he walks up the sidewall to the ceiling, where he continues to skate along while tapping, until he reaches the other wall, which he then proceeds to walk down. It’s a great moment in musical history.

Another treat performance is that of Miss Andrew (Ellen Harvey). She plays the mean and nasty nanny who raised Mr. Banks to be cold and emotionless and who is requested to the Banks household to care for Jane and Michael when Poppins unexpectedly leaves. Her voice sends chills down your spine as you root for Poppins’ return.

You’ll also recognize popular tunes like “Chim Chim Cher-ee,” “A Spoonful of Sugar” and “Supercalifragilisticexpialidocious.” This last one just might be the grandest of all the musical numbers, although there are quite a few awesome ensemble pieces.

Not only are the costumes, sets, actors and songs highly entertaining, “Mary Poppins” offers messages of hope in an often hopeless time. It emphasizes the importance of family, of being compassionate and supporting good men and women, of looking beyond the value of money to that of human life and of believing in the power of your imagination. Every bit of it is wonderfully inspiring.

Walking away from “Mary Poppins,” singing along to “Supercalifragilisticexpialidocious,” my excitement started to swell for the Ahmanson’s future scheduled musicals, “Dreamgirls” (Feb. 25-April 4) and “South Pacific” (May 27-July 17).