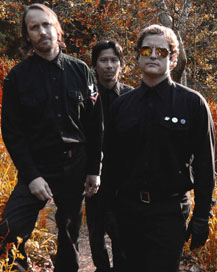 Maybe I was wrong. I thought rock ’n’ roll was about having the freedom to be who you are without apology. But today, being a rock star means conforming to the machine. 400 Blows hates the machine, they hate the marketing, the publicists and the packaging that comes along with being successful musicians. This Los Angeles-based trio caters to no one but themselves and refuses to conform to anyone’s standards but their own.

"I understand that music is a business. It’s about selling records and creating big numbers. Unfortunately, that really doesn’t tie in with artistic integrity. So when something comes around with artistic integrity, people don’t know what to do with it," singer Skot Alexander says in reference to the music industry.

Whether or not the music industry knows what to do with 400 Blows, one thing’s for certain: when listening to the band’s aggressive, stripped down sounds, it’s obvious that this it not the music your parents will approve of. But that’s exactly what the band prides itself on.

"In this day and age, rock music is safe. The abrasive stuff that we grew up listening to was not the music you could play in the background and listen to while eating dinner with mom and dad. That was the music that we were inspired by, and that is the music that we do," Alexander says.

Frustrated with the current state of rock, 400 Blows’ focus is to bring back the dangerous and aggressive music that its members believe demands to be heard.

"[Rock music] has become something to look at rather than something to pay attention to, and it’s really a sad thing," explains Alexander. "When we grew up, rock ’n’ roll was aggressive. Now it’s so non-aggressive that it’s polite and almost boring."

By focusing on the idea of minimal music through a deconstructed and simplified rock form, 400 Blows’ goal is to return listeners to music that once had soul and integrity behind it.

"There’s no special effects in our music, it’s just pure unadulterated rock and vocals. It’s all about the music and the audience; there’s no special trip-out shit," Alexander says. "If you trip out, that’s your own [thing]."

"During Black Rainbow, the last record that we recorded, I was coming from a different place," Alexander says. "I love what I wrote on that record too, but it was more un-optimistic; you know, there is no God, there is no love," he says.

Despite the dark past the band has endured, the lyrics this time around are described as coming from a dark place, yet moving to a lighter one.

"These lyrics are much more optimistic, there is love and you can respect people. I’m still not on the God tip or anything like that, but the idea of respecting yourself and respecting others is definitely a bigger part of my life now than it ever was."

Alexander wants to set the record straight: Just because the message of their lyrics may have changed, they are still the same three guys that continue to create the same dangerous music that they grew up on.

"Don’t get me wrong, we are not do-gooders, we’re not the kind of kids that bring an apple to the teacher. We are some dark motherfuckers and all three of us have hit rock bottom," he says.

"But, at the same time, we are all extremely passionate and have a lot of love in our hearts and, like other people, have struggled a lot. This album is all about believing that there’s something beyond the struggle."

Alexander recognizes that in today’s music so many musicians feel the need to start some sort of movement. 400 Blows don’t dislike movements, but it’s just never been their goal to be part of one.

"If what we do becomes a movement, then so be it. We are just trying to create music that we want to hear and that we don’t hear anywhere else," he says. "We’re not claiming to save rock or to be so different that we are up on a pedestal, but at the same time we love what we do and we’ll stand by that. If you really listen to our music, you’ll notice our unique hybrid, and there’s no denying that."

Angel’s Trumpets and Devil’s Trombones is currently available. 400 Blows will play May 26 at the Glass House in Pomona, May 27 and June 24 at The Echo in Los Angeles, and July 9 at The Smell in Los Angeles. For more information, visit www.400blows.net.