When in Cool Copenhagen: Do as the Danes Do! 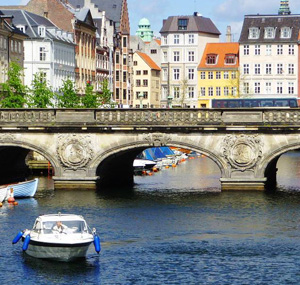 Take in the scenic beauty of Copenhagen.
(Credit: Kevin Wierzbicki)

With the United Nations Climate Change Conference now under way (through Dec. 18), Copenhagen is in the news more than ever. While political parties from across the globe are gathering to hash out a new climate treaty, leaving little time to sightsee, your visit promises to be very different.

Your first stop: National Museum of Denmark in Copenhagen (natmus.dk), a place where you can learn about the area’s history going all the way back to the Stone Age. The wall full of display cases houses many tools of ancient war; items like spears, arrows and shields.

Many of the skulls on display adjacently have holes cracked in their domes; an indication that the original owners of the remains may have been killed in a human sacrifice ritual. The somewhat macabre display is part of the Danish Prehistory exhibit, full of amazing artifacts like pieces of ornately-decorated pottery dating to 3200 BC and a collection of the giant bronze musical instruments called lurs, a type of horn used in ritual and often associated with the Viking culture. The prehistory exhibit is probably the museum’s most interesting display for visitors, and you’ll need at least an hour to thoroughly cover it.

And the rest of Copenhagen? Surprisingly, the best way to see the city is by bicycle and by kayak.

Danes love their bicycles, and it’s easy (and inexpensive) to rent a bike and head out to the streets of Copenhagen or to its more than one hundred miles of bike paths. Just about every visitor to Copenhagen wants to see her most famous lady, The Little Mermaid, and a popular bike route along Copenhagen Harbor takes you right by her perch at the Langelinie dock.

The iconic statue represents the Hans Christian Andersen fairy tale of the same name and is just one of dozens of striking statues of all sorts in place along the harbor’s promenade. After you’ve had your photo taken at The Little Mermaid you’ll have to visit her quirky little sister; sculptor Bjorn Norgaard’s postmodern The Genetically Modified Little Mermaid has her own unique view of Copenhagen not far away.

Other sights you’ll see along the Copenhagen Harbor promenade include giant sail-powered schooners, Danish Navy vessels, fountains and gardens, hip shops and eateries and the Copenhagen Opera House on the opposite shore of the glistening harbor. The bike paths in this area cross streets once in awhile but for the most part there’s no automotive traffic to interrupt a leisurely ride.

Gazing out at Copenhagen harbor will make you desire a watery adventure – time to trade in the bicycle for a kayak! Copenhagen is crisscrossed with canals; some are sleepy and lined with moored sailboats and some are busy with sightseeing boats, water taxis and personal watercraft. Taking a sightseeing tour by kayak is a Copenhagen tradition, and you can book them for various lengths of time and with or without a tour guide.

If you take a tour with Kajak-Ole (kajakole.dk) you’ll really get a feel for how the city operates as you glide by areas filled with historic buildings, modern apartments and shopping and business areas bustling with Danes going about their daily business. The guides at Kajak-Ole explain the sights as you paddle along in your one or two-person kayak.

The tour usually includes a stop at a canal-side café for a coffee or a glass of Danish beer. Some of the photo opportunities that you’ll get while out on the canals simply can’t be had with your feet on dry land!

Purchase a CPH Card upon your arrival in cool Copenhagen, and you’ll receive discount admission at many area attractions and a pass for the city’s bus, train and metro lines.

SAS Scandinavian Airlines (flysas.com) is the national carrier of Denmark and offers many options for flights to Copenhagen.