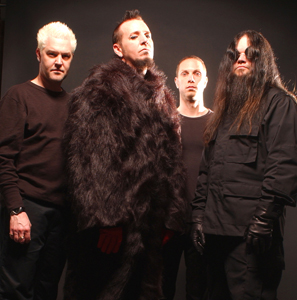 The new album from Mudvayne is scheduled to drop Dec. 22, and we can already report that reviews of the effort will be glowing. The self-titled album will be available on vinyl that glows in the dark, and both the vinyl and the CD will come with blacklight-reactive covers where you can only see the Paul Booth-designed artwork under blacklight.

Don’t have a blacklight? Preorder the Super Deluxe Limited Edition version of Mudvayne at Mudvayne.com, and you’ll get a 24-inch blacklight along with the CD and vinyl. You’ll also get a large blacklight poster and a blacklight decal designed by Booth. Also available is a Deluxe Package that comes with just the CD and a keychain-sized blacklight.

Musicians Institute Scholarship Up For Grabs

To help aspiring musicians who are ready to pursue their education but unfortunately lack economic means, the Musicians Institute College of Contemporary Music has announced a nationwide scholarship competition. And the Hollywood-based school is going all out with the prize: The winner gets a “full ride” scholarship at MI beginning in spring of 2010, plus up to $10,000 in living expenses.

Details on how to enter the competition can be found at MI.edu, and if you want to check the school out in person they will be having an open house at 1655 N. McCadden Pl., Hollywood, on Jan. 9.

Are You the Ultimate DJ?

“Scratch: The Ultimate DJ” (a video game releasing next year) and AllHipHop.com are searching for the “Ultimate DJ.” To enter the contest, all you have to do is film yourself scratching to one of 13 specific songs like “Skanky Panky” by Kid Koala, “Intergalactic” by the Beastie Boys and “Slacker” by Tech N9ne.

If you’d like to enter you need to hurry, entries need to be received by Dec. 16. Find contest details and a full list of the 13 songs at AllHipHop.com.

Musicians of all skill levels will find something of benefit in the new book by David Cutler called The Savvy Musician: Building a Career, Earning a Living and Making a Difference. Cutler is a professor at Duquesne University in Pittsburgh, but his resume is extensive: jazz and classical composer, pianist, arranger, conductor, concert promoter, etc.

As the book’s title indicates, Cutler’s goal is to take the talented musician and make him or her savvy to the point where they can sustain a career. Chapters are devoted to everything from building a brand to capitalizing on technology to finding ways to raise money to fund your musical dreams.

Scattered throughout the chapters are 165 vignettes contributed by working musicians, each tying into the chapter’s subject. The Savvy Musician is available now in paperback from Helius Press.

We Are (Still) Devo

Warner Bros. has released a new four-disc box set from Devo called The Ultra Devo-lux Ltd. Edition. The set contains the electro art-rockers’ groundbreaking albums Q: Are We Not Men? A: We Are Devo and Freedom of Choice along with two DVDs that feature a recent live performance exclusive to this set and a few classic videos.

Three previously unreleased bonus tracks are included on the CDs, as is the rare six-track Dev-O Live E.P. The Ultra Devo-lux is only available through ClubDevo.com.