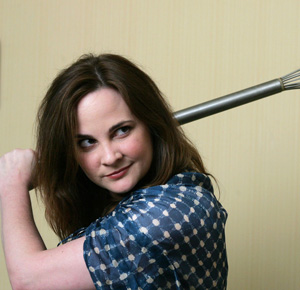 Julie Powell's Cleaving finds her working for a butcher and immersed in a love triangle.
(Credit: Ken Lambert/Seattle Times/MCT)

Commuters: An ideal gift for grandparents, traditionalists and nostalgists, Garrison Keillor’s A Christmas Blizzard will transport you to a time that perhaps never existed. With his inimitable voice, Keiller reads his tale of holiday cheer with typical baritone verve.

Laughter, the perfect antidote to driving in bumper-to-bumper traffic, may be the best gift of all. Three of America’s best humorists promise to get anyone from point A to point B with a smile on his/her face. The always-hilarious David Sedaris’ new CD, Live For Your Listening Pleasure, provides five terrific examples of the author’s work that promise to tickle any and all comers. David Cross and Sherri Shepherd also offer amusement and fantastic stocking stuffers with their respective works, I Drink For a Reason and Permission Slips.

Malcolm Gladwell, bestselling author of Blink, The Tipping Point and Outliers, may be America’s most surprising alchemist, spinning seemingly quotidian facts into storytelling gold. His latest gem, What the Dog Saw, assembles more of these tales, taken from the pages of The New Yorker, which promise to entertain in the most unlikely ways. The CD version is a perfect present for those who can never find the time to read The New Yorker but long for a little high culture.

Confused at Heart: Everyone has that female friend who can’t stop complaining about relationships, why not give her Stephanie Rockey’s Ladies Listen Up!? It may turn out to be the best gift ever.

Conspiracy Theorists With a Sense of Humor: One of those too strange to be true stories, Jon Ronson’s The Men Who Stare at Goats provides laughter and tears at the absurdity of the world we live in. This nonfiction tale unveils a secret American military unit that believed they could kill goats with their piercing gaze – a perfect book to listen to as we cruise into the second decade of the 21st century.

Escapist: Lauren Grodstein’s A Friend of the Family reads half like a mystery and half a sage of family, betrayal and trust. A page turner in the best sense because the protagonist, an unusual and compelling character, keeps you coming back for more even as his moral ground begins to crumble out from under him.

Half Broke Horses, while not a memoir like Jeannette Walls’ previous effort, The Glass Castle, is curiously billed as a “true-life novel.” Based extremely loosely on her grandmother’s fascinating life, Walls has found a way to move effortlessly from one genre to the next, creating perhaps a whole new category of fiction/memoir adjacent.

Likely my favorite book of this new century, Alice Sebold’s The Lovely Bones had me at hello. For those who somehow missed this unique and compelling novel, the CD version will keep them sitting in their car long after they arrive at their destination.

Fashion Lover: Compiled from one of my favorite Web sites, The Sartorialist compiles some of photographer Scott Schuman’s best shots of stylish people he encounters from around the world. With a keen eye for the unique and a great sense of composition and color, Schuman blends fashion and art into true beauty.

Film Lover: Robert Altman, by Mitchell Zuckoff may be the definitive work on one of America’s best directors. This “oral biography” includes funny and entertaining stories and testimonials from film greats like Julie Christie, Meryl Streep and Martin Scorsese.

Foodie: Almost anyone will benefit from Deana Gunn and Wona Miniati’s Cooking with All Things Trader Joe’s, a near genius concept full of recipes made up of TJ’s products. There is also a pocket version, The Trader Joe’s Companion, which slips easily into a recyclable shopping tote.

Now that the mechanics of food preparation, buoyed by television shows like “Iron Chef,” seem poised to become an Olympic level sport, anyone and everyone wants a chance to prove their über chef skills. Alton Brown’s Good Eats is the perfect jumping off point with more than 140 recipes and a scrapbook format dazzling enough to tantalize the most novice aspirant.

With 2009 sadly tolling the death knell for the increasingly terrific Gourmet magazine, food lovers everywhere will revel in two books that commemorate this lost but not forgotten classic. Both edited by former editor-in-chief Ruth Reichl, The Gourmet Cookbook and Gourmet Today are full to bursting with over 1,000 recipes each. Nothing eases the pain of loss like devil’s food cake with brown sugar buttercream frosting (Gourmet Today, page 742).

Grinch: The Dreaded Feast: Writers on Enduring the Holidays, by Michele Clarke and Taylor Plimpton, overflows with terrific authors from humorists, like David Sedaris and Mark Twain, to more meaty types, like Charles Bukowski. The introduction alone, by P.J. O’Rourke makes this collection a worthy stocking stuffer.

Highbrow Types: A smorgasbord of talent, David Foster Wallace’s Brief Interviews with Hideous Men on CD includes readings by the author, John Krasinski, Bobby Cannavale and a host of other intriguing sorts. Many rank this collection of stories in the writer’s inimitable style among the best of his generation.

Another new genre, “faction,” The Sisterhood of the Rose, by Jim Marrs, combines fact and fiction to re-imagine World War II. Also a nonfiction conspiracy author, Marrs brings innumerable strengths to this effort.

Interior Design Nut: The fabulous Kelly Wearstler makes a colorful splash with her new book, Hue, an ode to all things decorative. Wearstler, know for her flamboyance and more is more credo, fills the pages with her indomitable style.

Introspective Sort: Fresh from her enormous success with Julie & Julia, Julie Powell returns with the sequel, Cleaving. Subtitled, “A Story of Marriage, Meat and Obsession,” Powell’s latest finds her working for a butcher and immersed in a love triangle. The CD version includes a conversation with the author and enough to satiate the listener’s own obsession with all things Powell.

Just when you thought there were no original takes on the personal tale left to tell, along comes Elna Baker’s The New York Regional Mormon Singles Halloween Dance. This amusing and sincere memoir plumbs the conundrum, the oxymoron of being both a Mormon and a city slicker.

The most famous concert of all time, Woodstock, has become its own cottage industry. Artie Kornfeld (a.k.a. “the Father of Woodstock”) provides a bird’s-eye look into the phenomenon with The Pied Piper of Woodstock – a great gift for someone who values the history of rock ’n’ roll.

Policy Wonk: One of America’s most beloved politicians, Edward M. Kennedy, shimmers back to life with the release of his memoir, True Compass. The 17-CD unabridged version will fascinate anyone with his personal and political tales.

Pop Culture Enthusiasts: From Ralph Nader to Rear Window, Garth Brooks to “Mad Men,” Chuck Klosterman (of the fabulous Sex, Drugs, and Cocoa Puffs) manages to muse on anything and everything in Eating the Dinosaur. The perfect gift for the nihilistic humorist in your life, Klosterman writes seemingly effortlessly yet way better than everyone else.

Teens, or Teen at Heart: Pamela Todd’s The Blind Faith Hotel, aimed at the enormous teen audience, works equally well for older readers. With good writing and compelling characters, this coming-of-age story follows a family who has fallen on hard times.

Traditionalists: Managing the unique feat of amassing hipness with age, Norman Rockwell, an artist once dismissed for his lack of grit, is slowly but surely being reevaluated. Ron Schick’s Norman Rockwell Behind the Camera will take you through this reversal of reputation by showing the images behind the paintings. Fascinating.

The Very Young, or Young at Heart: A terrific gift for your favorite little person, the always-classic The Complete Adventures of Curious George holds up beautifully in this very modern age. Written and illustrated by the incomparable Margret and H. A. Rey, this collection of seven tales will delight all comers.

Todd Oldham, known for his use of color in fashion and design, his sense of fun and his love of DIY, easily segues into the world of children with his new book, Kid Made Modern. A stylish and approachable set of projects for kids to create inspired by mid-century artists.