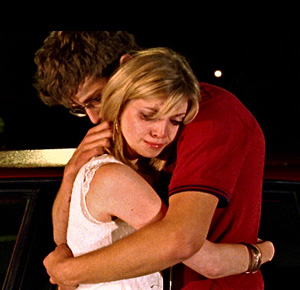 By Waist Side is about a store clerk’s encounter with a call girl that changes his life.

There is an unfortunately low number of people who go out of their way to watch short films. But unlike the career of the writer who suffers from the strikes and lack of interested readers, people will always demand new movies.

As a current student in film school, I realize how vital the short film is to starting your career in the industry so that you can move on to bigger and hopefully better things. It’s a matter of building your reel so that producers can see exactly what you’re capable of. It’s a right of passage as a filmmaker.

Let me tell you, it’s not as easy as it looks. I’m just finishing up a semester in a film production class that forced me to become a constant storyteller. We were required to write, cast, shoot and edit four short films. Then the exclusive, high school-like click that formed between me and some of my classmates (who turned out to be the coolest people I know) made a group film, a pretty impressive one if I do say so myself.

But there are elements to getting the right shot that you would not automatically recognize. During production you have to take into consideration lighting, screens, camera angles, makeup, shot composition, lens type, etc. It is a rigorous, painstakingly slow process even with a script only five pages in length (equivalent to a five minute short).

And though making a feature film may take more time, it also means you have much greater opportunity to tell your story. You can develop characters and plot over many, many minutes, whereas a short film forces you to jump into every element immediately. To get your audience and keep them riveted to the screen for the several minutes you have them, everything must be aesthetically compelling.

NewFilmmakers Los Angeles is looking to change the stigma placed on films that are not regularly watched by the American public. The program is showing shorts made by up-and-coming bigwig filmmakers for the benefit of this movie-obsessed town. The screenings that take place at Sunset Gower Studios are geared toward celebrating the meticulous work of creating the short movie.

The NewFilmmakers Series began over 10 years ago in New York. Screening over 500 features and 1,600 shorts, the series discovered many well-known films like 1999’s The Blair Witch Project.

A majority of moviephiles stick to feature films because they are more intricate and elaborate vessels for storytelling. I’ll even admit that before my first production class, the only shorts I watched were the ones featuring cute animals that premiered before the new Pixar hit.

The showcase is trying to reverse the damage done to low budget, independent films. It features emerging professionals from around the world in a series that provides filmgoers with their monthly fix of screening events. The program also creates an opportunity for the oft-forgotten contributions of such artists to be recognized and appreciated with a discussion about the work with an open audience.

Now that it made its way to the superior coast, NewFilmmakers LA is rolling out the red carpet every month. Documentaries, shorts and features are followed by a Q&A with the director. There are even special after parties so that the audience can mingle with the talented filmmakers.

This month we can look forward to By Waist Side, a 23-minute short about a store clerk’s encounter with a call girl that changes his life; The 8 Track to Enlightenment about overusing prescription drugs to avoid obsessive compulsive behavior; and After Hours, about a janitor’s ability to pass through menial work by creating an imaginary dance partner.

If you’re worried about paying for so many screenings in these hard economic times, fret not. Tickets to both the first and second programs of short films total less than the cost of one adult ticket to a movie at AMC. Honestly it’s a small price to pay for the incredibly encouraging support that attendance would provide these hard-pressed, hardworking filmmakers.

You never know. You may even find that you like short films after all.