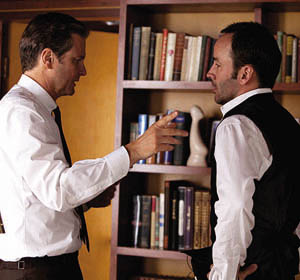 Tom Ford may be the only director in Hollywood who also owns and operates a successful line of menswear. His day job, however, is off limits.

“I’m here to talk about the film and the film only,” the designer-turned-filmmaker makes certain to preface. “Fashion is very different for me in terms of why I decided to make a film and what sort of expression it was.”

The film he’s talking about, of course, is A Single Man, an adaptation of a 1964 novel by Christopher Isherwood. Ford co-wrote and directed the film, which is already being hyped as an Oscar contender.

“We seem to have lost character-driven films with dialogue, and this is the type of film that I set out to make,” Ford says.

Ford was first exposed to Isherwood’s novel in his early 20s. It was the protagonist George Falconer, a middle-aged British professor struggling to find meaning in life after the untimely death of his longtime partner, that initially drew him in.

“I was moved by the honesty and simplicity of the story,” Ford recalls. “There is much of me in my version of George.”

Fast-forward to 2005 and Ford, who left Gucci to form his own film production company, was searching for the right project to develop as his first feature. Almost by happenstance, he again stumbled upon Isherwood’s novel and found that it resonated with him in an entirely different way.

“It is a universal tale of coming to terms with the isolation that we all feel, and of the importance of living in the present and understanding that the small things in life are really the big things in life,” he says.

Ford optioned both the novel and a completed screenplay by David Scearce, but soon realized that if he wanted to make the film his own, he’d have to start from scratch. Scearce’s original screenplay lacked the aesthetic feel Ford wanted for the film, and he soon set about the daunting task of rewriting. It would take the better part of two years before he had a draft he was comfortable with.

“When you are imagining a scene while writing it, there are no problems. Actors speak their lines perfectly. The shot is beautiful. But that is because you aren’t working in reality,” Ford says.

Much of the novel is told through interior monologue, which Ford knew would be problematic on screen. To keep the essence of the story intact, he added a series of personal encounters and flashbacks and kept George’s voiceovers to a bare minimum.

“I started out trying to have no voiceover,” Ford admits.

There’s also an element of finality that Ford added to the film with George’s planned suicide at the day’s end. Although not in the original novel, Ford notes it was vital to his telling of the story.

“George has been living in the past, he cannot see his future and cannot shake a deep depression, and so he decides to end his life,” Ford muses. “Thinking that he is seeing things for the last time, he begins to view the world differently and finds himself for the first time in years living in the present and confronted with the beauty of the world,” he adds.

George’s heightened awareness is represented through color, which plays an important role in the film. Ford wanted the audience to experience colors and objects like George is, which is why his amplified mood by the day’s end is complemented with a vibrant color palette on screen.

“The color heightens when George starts to really look at things,” Ford says. “By the time we get to the evening and the beauty of life is pulling at George, he is living almost entirely in Technicolor.”

For a first time director, A Single Man is as much a stunning visual achievement as it is a well-acted film, with Colin Firth sure to win acclaim for his role as George. Now that the film is complete, what does Ford want audiences to take away from it?

“A great movie haunts you,” Ford says. “I hope that A Single Man makes you question things.”