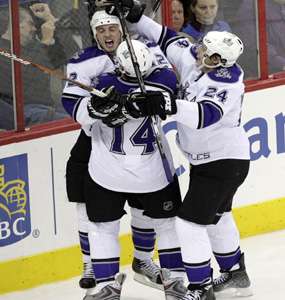 A few local members of hockey royalty embarked on a small journey to Anaheim last week. The purpose of the first of three journeys to the quaint suburban Orange County town had remained the same since 1993: defeat some fowl.

On Dec. 1, those members of hockey royalty known as the Los Angeles Kings edged past the Anaheim Ducks, 4-3, at their humble abode of a pond.

As the Kings were celebrating their mastery of the Ducks in the post-game locker room, something felt quite different about the variety of fowl they discovered in Anaheim. Head coach Terry Murray reminded them they had “traded places” like Eddie Murphy and Dan Aykroyd.

Light bulbs instantly went off. Early expectations had the Ducks challenging San Jose for the Pacific Division crown, with the Kings struggling for a playoff spot.

The records are a bit of an anomaly. Entering this week’s games, the Kings have the worst penalty-killing percentage (76.5 percent) in the West, while the Ducks are the top power play scoring team (24.3 percent conversion) in the West.

Of course, the Kings have Anze Kopitar (35 points, fifth highest in NHL) and goalkeeper Jonathan Quick’s 16 wins (one behind the league-lead) pacing the team. The Kings are also winning away from home, their 10-6-1 road record is fifth-best in the NHL; Anaheim’s 2-5-4 mark is the league’s second-worst.

Meanwhile, injuries have taken their toll in Anaheim, with Joffrey Lupul, Teemu Selanne, James Wisniewski, Saku Koivu and Jean-Sebastien Giguere all missing significant ice time. With constant lineup changes and 10 of their next 12 games on the road, the Ducks may not move out of the Western Conference basement any time soon.