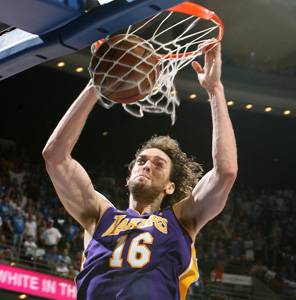 The Lakers have won every game since Pau Gasol returned to the starting lineup Nov. 19.
(Credit: Gary W. Green/Orlando Sentinel/MCT)

The Lakers have not lost a game since Nov. 15. and are No. 1 in the Western Conference at 16-3. This is their longest series of wins since garnering 10 in a row in February of 2008.

When forward Pau Gasol returned to the starting lineup Nov. 19, he solidified the Lakers’ frontcourt as an additional seven-foot force and has improved interior passing. His presence in the rotation was a definite factor in the Dec. 1 blowout of the 8-11 Hornets at Staples.

“We have so many weapons, so many guys who can be effective and put up big numbers any night,” Gasol commented after the game. “It’s more fun when we share the ball. It makes us more dangerous because teams really don’t know who to stop with so many options and players.”

Unfortunately, Friday’s match at Staples was not as easy against the 11-9 Heat. With 17 lead changes, it was an ugly game: The Lakers shot for just 43 percent.

But the continually close game came to a thrilling end. Miami was ahead by four with less than 10 seconds left in the fourth. Then, Derek Fisher cut the lead to one with a three. And with half a second left on the clock, Kobe Bryant launched a 27-footer to clinch the 108-107 win.

Sunday night at Staples was less of a nail-biter. Although the beginning of the game against Phoenix (15-6) was close, the Lakers pulled away with a 15-1 run at the end of the third quarter. Bryant led all scorers with 26, three assists and seven rebounds in their 108-88 victory.

The Lakers host the 11-8 Jazz Wednesday night and the 3-17 Timberwolves, led by head coach Kurt Rambis (a former Laker player and assistant coach), Friday. The Lakers have played 15 of 19 at Staples so far this season but head out on a five-game road trip beginning Saturday in Utah and Tuesday in Chicago (7-11).