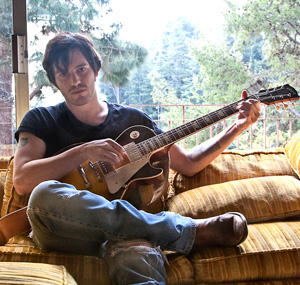 Francis says, “This is my dog Pancho.”

Nailed it. Townes Van Zandt is one of those comparisons critics and music aficionados have repeatedly likened Francis’ music to, especially his last record, One By One. It is only right that Francis is compared to Van Zandt, along with Steve Earle and Graham Parsons, some of the greatest country-folk blues natives of a time past. Francis lives in that time, and as a younger musician, he embodies the roots of our American music past intrinsically, culled in part by a longtime grandfather by marriage, Ry Cooder.

Francis laughs, “He told me, at one point, the best things you can do are the things you do for yourself. You don’t need any help, do everything yourself, and you’ll be squared away, you’ll be fine.”

“He has been a staple in my life and my upbringing. I never really knew who Ry was growing up, how important he was,” Francis continues. “The older I get, the more I appreciate him. He’s pretty unbelievable. I remember I’d just sit there and listen to him play for hours, and he’d teach me different things here and there.”

Francis is doing seemingly well for himself now. Recently picked up by Atlantic Records, Francis talks about his new album, Before Nightfall.

“It is a good illustration of where I’m at today and the way I have grown since I released One by One. My outlook when recording One by One was a lot more naïve, and I had a lot less faith in people. This record’s a coming-of-age depiction of the way I look at the world and my life today,” he says.

Now that he’s on a major label, so far he has one of those ideal scenarios where he feels like he has free reign for the most part, with help in the right places when he needs it.

“For a long time I was trying to produce the record myself, and Atlantic gave me money, even before I signed the deal. I somehow convinced them to give me some scratch to go out to the desert to this house that we’ve had since the ’50s and build a studio with a band. It turned into this never-ending pool party.”

But he did come back with four to five songs of pretty polished collateral for Atlantic.

He says, “This was really my opportunity to convince them to produce the record, and that I would do a good job.”

They then took it to London to producer David Sardy, who was in the process of mixing the new Oasis record at Abbey Road Studios.

“We cut the record in about three weeks, and it was much easier than the first record,” shares Francis. “I didn’t sit at the computer for hours tweaking sounds and losing my mind. I was able to just bring my live band into the studio, we recorded it in one week live and then did vocals the next week.”

Francis lives in a musical household: His dad is a music collector and pianist; his sister is musician Juliette Commagere. Walking me through his studio, past his favorite gold velvet couch dated much older than he is, Francis starts at a giant sprawling piano.

“This is Crosby, Stills, Nash and Young’s 1972 grand piano. They stopped using it at the Hollywood Bowl, and my dad bought it. There was blood all over the keys ... and these speakers, they mixed Harvest and other ’60s and ’70s records on it,” he says.

Walking out of the library, Francis stops short and turns a corner: “Oh and that’s Sean Carpenter’s, Karen Carpenter’s bass amp right there.”

Aside from having the world’s most gentle personality that reaches all heights of perfection, obscure musical tastes that include Canadian folk artist Fraser & DeBolt and a really bitchin’ gold couch, Francis’ standards appear innocent, yet are unfailingly high.

Before Nightfall is currently available. Robert Francis will perform Dec. 12 at the Wiltern. For more information, visit robertfrancisofficial.com.