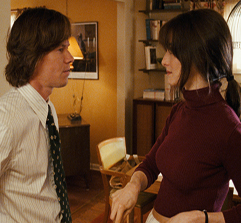 Who could have guessed that the story of a 14-year-old girl, brutally raped and murdered on her way home from school, would become one of the decade’s most beloved tales? The Lovely Bones, Alice Sebold’s renowned, adored, best-selling novel about Susie Salmon watching over her family, friends and murderer from “The In-Between” as they grieve and fixate on her, captivated readers and now arrives on the big screen just in time for awards season.

Peter Jackson, beloved for his treatment of The Lord of the Rings, has come under intense scrutiny and criticism for this adaptation, which he co-wrote as well as directed and produced.

“In my mind, there’s no such thing as a perfect adaptation of a book,” Jackson retorts. “To me, to adapt a book is not a question of producing a carbon copy ¬– that’s impossible. The masterwork is the book, and that has everything in it; every character, every subplot, and that’s the way you should experience the story in its most pure form. A film adaptation of any book is only ever going to be a souvenir of the book.”

For Rachel Weisz, who stars as Abigail Salmon, Susie’s grieving mother, Sebold’s novel was invaluable. Re-reading the story over and over again, Weisz called the tome “great fuel” for her imagination. However, for her co-star, venturing into the tale was a much darker, scarier prospect.

Mark Wahlberg, who took over the part of Susie’s father after Ryan Gosling was fired days before filming was set to begin, had tremendous difficulty embarking on the material. It wasn’t for lack of preparation, but because of how disturbing the plot is and the horror it inspired when he thought of something similar happening to one of his three young children.

“Because of the way I approach work, I wasn’t all that thrilled about the subject matter,” Wahlberg explains. “I don’t have the God-given talent Rachel does to just snap into it, have these floods of emotion coming out and then turn it off. I basically had to live in that headspace for the entire time.”

Asked if the story had a similar impact on Weisz, also the mother of a small child, she smiles knowingly and shakes her head.

“As an actor, you have to imagine all sorts of things. You imagine beautiful things, you imagine ugly things; that’s my job.”

The actress reveals that she rarely finds material too dark or problematic to venture into, largely because she knows how to yank herself out at the end of the day.

“I immerse myself in something, but I’ve learned how to come out of it. I can’t go home to my kids in a state of despair and tears,” she laughs. “It’s a skill you learn, like one might learn to juggle. You learn to turn things on and off.”

“I’m still learning to juggle,” Wahlberg shrugs sheepishly. “I would go home and grab my daughter and hold her. And I would start crying. She’d be like, ‘Daddy, what’s wrong with you?’ She just wanted to play.”