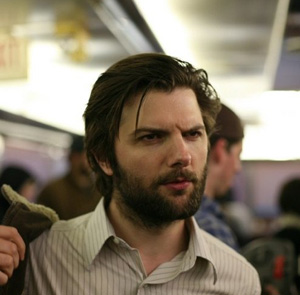 It’s always the gruesome car crashes that cause the most traffic. You know the ones where you see the flashing police lights from miles away that tease your unmoving vehicle as you are dying to inch your way past the wreck. By the time you get there, everything clears, and you’re 30 minutes late. So what the heck, since you’ve suffered the tedious wait, you might as well get a good long look for yourself.

This movie is kind of like that, and I mean it in the best way possible. In The Vicious Kind, director Lee Toland Krieger offers a story about the train wrecks personified by the lost and wandering people that inhabit our lives.

Caleb Sinclaire (Adam Scott) is a construction worker who is tormented by the women who have traumatized him nearly beyond repair. Estranged from his father Donald (J.K. Simmons) after the death of his mother, Caleb lives in virtual isolation.

Returning home for the first time in eight years, Caleb is accompanied by his younger brother Peter (Alex Frost) and Peter’s new girlfriend Emma (Brittany Snow). Caleb is immediately wary of the newcomer who looks eerily identical to the ex who recently broke his heart.

Caleb’s mood changes like wildfire, calling Emma a whore and then begging forgiveness for his insensitivity. But as his initial distrust subsides, Caleb finds that he is increasingly attracted to his brother’s girl.

Emma is torn between her nice frat boy boyfriend and his confused, idiotic older brother. Thanksgiving brings them to the same home, but unexpected attraction tears the family apart. Caleb doesn’t necessarily resist acting on his feelings for Emma, but he ultimately resolves the demons of his past for Peter’s happiness.

The film is not really the poster child for a romantic comedy. Granted it is a comedy involving romance, but both are used against each other with a sharp edge as dark as it is malicious.

Scott is a very good actor, one you may recognize though not by name. He accentuates the crazed and wicked nature of his character with little judgment or condemnation.

And as much as Caleb would like to argue, it is not just women that bring destruction to families and relationships. The viciousness of getting your heart broken is an experience that is not gender exclusive. Well, so I gathered as I zoomed past.