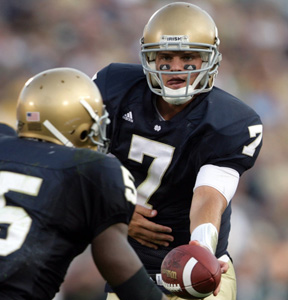 Jimmy Clausen passes on his senior year at Notre Dame for a chance at NFL greatness.
(Credit: Rashaun Rucker/Detroit Free Press/MCT)
Charlie Weis uprooted him from suburban Los Angeles to South Bend, Ind. Now, the embattled former head coach is giving quarterback Jimmy Clausen some very familiar advice: “Get out while the getting is good.”

These were not Weis’ exact words, but what he was basically telling the former Oaks Christian product was to leave Notre Dame while he can, so long as he had the chance to do so. And with Weis’ firing, the time is definitely ripe for Clausen to leave for the NFL.

It was announced this week the former Los Angeles-area football standout is declaring for the NFL Draft. The Westlake Village product is indeed getting out of Notre Dame while the getting is good.

Yes, the very person who advised him to do so was the same man who was forcibly ejected from South Bend last week. Just as the door was beginning to close on his coaching career pacing the Notre Dame sideline, Mr. Weis himself turned to perhaps his greatest recruit and told him to leave for the greener pastures of the NFL.

“Coach Weis told me whether he was going to be here or not be here, it was time for me to go,” Clausen told ESPN.com earlier this week. “I’m taking his advice … I’m going to head out.”

Decent advice, considering the future of Irish football is now as uncertain as ever. A new coach means new recruits – and a new playbook.

That gives Clausen ultimately two choices on how to pursue his senior year: spend 10 games learning a new playbook with new players, only to have to repeat the process again the following season as a pro, or bypass Notre Dame altogether and become a learning NFL quarterback one year earlier, getting paid millions to do so.

If anything, by officially declaring for April’s NFL Draft this week, Clausen is being efficient – opting to learn one offense for at least the next two seasons instead of guaranteeing himself figuring out two playbooks within one calendar year.

Of course, with numbers such as a 68 percent completion rate, 28 touchdowns, four interceptions, 3,722 passing yards and a 161.43 passer rating in 2009, Clausen’s draft prospects are definitely at their peak this season, with his stock guaranteed to drop if he stuck around to learn a new system in his senior year. Clearly, a case of diminishing returns, meaning the getting was definitely as good as it would ever get for him to leave town.

Now the question is whether Clausen is good enough to be an NFL quarterback. The answer is an emphatic yes.

Indeed, he will be among the greatest NFL quarterbacks to ever come out of the L.A. area. After all, when he graduated from nearby Oaks Christian High School, Clausen was the consensus No. 1 high school football player in the nation.

Of course, the 2010 NFL Draft features a solid quarterback class, with gunners such as Tim Tebow, Colt McCoy, Sam Bradford and Zac Robinson joining Clausen. Even if those four go ahead of him, remember another former Irish quarterback, Joe Montana, was picked 82nd overall by San Francisco before embarking on his Hall of Fame professional career.

That being said, Clausen is the most NFL-ready quarterback in his class.

And Clausen knows Weis molded Brady (and Drew Bledsoe) into solid NFL quarterbacks during his days as offensive coordinator with the New England Patriots.

With his skills and experience, Clausen will eventually be mentioned in the same breath as not only Brady and Favre, but also the elite club of top quarterbacks to come from Southern California. That list includes the likes of John Elway, Warren Moon, Bob Waterfield and Jack Kemp.

Not only is Clausen getting out of Notre Dame while the getting is good, he is on the verge of NFL greatness. It does not get any better than that.
Article posted on 12/7/2009
This article has been viewed 1408 times.

The Sports Wanderer
Welcome to the Pacific-12
44,472 views

The Sports Wanderer
Gagne With the Wind
1,993 views

The Sports Wanderer
Godzilla Dons Halo in The Bronx
2,105 views

The Sports Wanderer
Jerry Busses to the Famed Hall
1,941 views

The Sports Wanderer
Get Rid of the Clippers
2,411 views

The Sports Wanderer
A Bleeding Heart for Vinny
2,801 views

The Sports Wanderer
No Angels In This Bracket: 2010 March Madness
1,950 views

The Sports Wanderer
Kobe Opting Out of Los Angeles
1,950 views

The Sports Wanderer
The Golden OC and the Silver L.A.
2,764 views