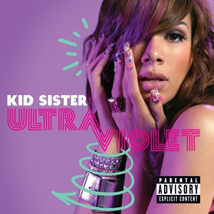 Years after she released her first couple singles, Kid Sister has finally put out a debut, Ultraviolet. Considering the Chicago-native is Kanye West’s homie and has renowned turntablist A-Trak in the production booth, I anticipated something, well, better.

I’ve been rocking the Rusko remix of “Pro Nails” for years now, and this is my first time hearing the album version. I dig it, but eh. Others, like “Daydreaming” and “Life on TV,” are solid tracks, and I can hear “Right Hand Hi” playing in the club. But then I turn on a song like “Switch Board,” and I want to shoot my iPod.

Don’t get me wrong, the beats are stupidly well done; A-Trak and pals have that electro hip-hop vibe down pat. Unfortunately, I can’t say the same about Kid Sister’s verses.

She has got style, personality and flair, but none of them are consistent on this album. It’s an attempt at rap-for-the-dance-club tracks that you’ll probably hear on the playlist, but never request in the mix.