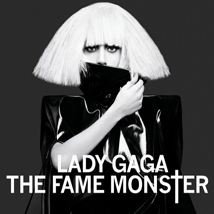 Despite the slick platinum wigs, bubble gowns and blood-splattering stage antics, there’s no denying that Gaga has a certain je ne sais quoi that’s nothing short of spectacular. The Fame Monster is an explosion of genres uniting as one massive party, instantly discovered on first track “Bad Romance.”

As if The Fame Monster couldn’t get any better, she unites with Beyoncé on “Telephone.” Surprisingly enough, their powerful vocals don’t attempt to battle each other but fuse in an explosive mix of fist-pumping beats.

The Fame Monster promises audiences that the New Year will bring more of what she hasn’t dared showed us yet. From glittering fashion shows to zombie lovers attempting to bite on bad girl meat, The Fame Monster should be feared, because it’s only the beginning of Gaga’s 15 minutes.

The Fame Monster is currently available.