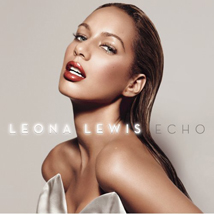 When Britain’s Leona Lewis first released her debut, Spirit, in 2008, listeners instantly fell in love with her powerful pipes and corkscrew curls. However, audiences wondered if “The X Factor” winner could actually make a name for herself.

Now comes her follow-up, Echo, a collection of songs touching on women’s suffering and success in romance. Lewis kicks off Echo with “Happy,” and her talent to make us cry along with her is undeniable. Produced by Ryan Tedder of OneRepublic (also appearing on “Lost Then Found”), “Happy” skips all the fluff often found in ballads and goes straight to skyscraper-reaching notes.

In a surprising move, she strips down in “I Got You” and channels a folksy Paula Cole. The song is dreamy, ethereal, seductive and is a change for Lewis, considering that she collaborated with Swedish pop king Max Martin, the man behind the Backstreet Boys and Britney Spears. The theme in Echo is certainly about taking risks, and it undoubtedly works in her favor.

Echo does sound a bit familiar to Spirit, thanks to its many arena-ready songs surrounded by failed relationships. However, both fans and new listeners alike will discover that Lewis manages to explore many sides to her music.