How the West's Ice Crown Was Won 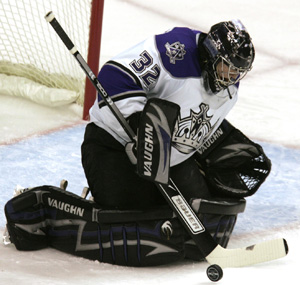 Well, the Kings certainly enjoyed their stay in California. Playing eight games within state boundaries since Nov. 28 – the Kings only traveled to San Jose and Anaheim during that stretch – Los Angeles’ hockey club has managed to do something no one expected them to do.

After placing in the bottom five in the West in each of the last three seasons, Los Angeles is tied with San Jose for the best record in the conference, thanks to a 7-0-1 record during its California-friendly schedule. St. Louis was the blemish on the Kings’ mark in the last two weeks, a 5-4 shootout loss.

The Kings (21-10-3, 45 points) are in uncharted ice waters, just trailing the Washington Capitals (20-7-6, 46 points) for the NHL lead. (Pittsburgh and New Jersey also have 45 points.) However, the Kings worked extra hard to get here, what with five of the last eight games going into overtime, four of them ending in a shootout and only one game (a 6-3 victory over Ottawa) being decided by more than one goal.

So what has been working for Los Angeles? Goaltending and holding late leads.

Goalkeeper Jonathan Quick, playing seven of the eight games, stopped 92.3 percent of shots faced during the unbeaten streak; he also is second in the league with 19 wins, trailing only New Jersey’s Martin Brodeur (20 wins).

Stanley Cups are not won in December, yet the Kings did not reach 21 wins until Feb. 3 last season.

With seven of their next nine games coming on the road, the Kings will now see if they are worthy of remaining in its elevated status as Western Conference leader, or if Los Angeles was merely California Dreaming.