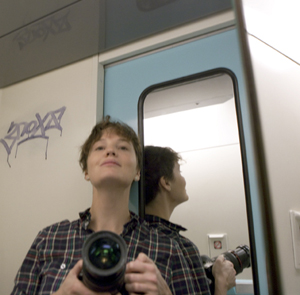 Eight lucky photography students were offered the chance of a lifetime to spend 10 days, all expenses paid, in arguably the most romantic country in the world – France. The catch? Take pictures.

Now in its fourth year, the Jeunes Talents, or “Young Talent,” program gave students from five major U.S. universities and institutes the mission of documenting contemporary French life from their own unique perspectives and vantage points. The collection pairs French cities with young American photographers representing a wide range of photographic styles and interests. The students chose to adopt varying themes in their work with the common goal of capturing on film the essence of their distinct French destinations.

Maria Schriber, a 2009 graduate of Cal Arts who traveled to Lille in northern France, discusses capturing “the grits and the charm” in her photos.

“I wanted to capture the juxtaposition between the old part of the town that is really charming and quaint and picturesque, and then there is the more gritty outer lying suburbs where a lot of the immigrants live,” Schriber explains. “The old and the new.”

Tim Wride, a prominent photography curator, was selected to supervise the students and their projects. Wride will also curate three exhibitions of the students’ work in 2010, starting with a Los Angeles show that will take place April 7-21, and continuing to New Orleans and New York. Says Wride of the program: “Students will be given free rein to interpret the daily life of the city where they are assigned. The result is expected to be a radical departure from the traditional imagery of France.”

That radical departure was manifested in the students’ display of cultural and socioeconomic diversity in the French cities. Six of the students, who all traveled from October 9–19, were spread amongst five different cities in France and, for the first time in the program, two students spent time in French Polynesia. Karolina Karlic, a second-year graduate student at Cal Arts, notes her cultural observations while in Tahiti.

“There is this contrast of modern culture and traditional culture melding together and existing on a day to day basis at the same time, which I found to be the most interesting aspect of experiencing contrasts and extremes,” Karlic elaborates. “I think the images speak on both traditional and modern ways of life.”

Although the trip had all the underpinnings of a great vacation, the students spent most of their time on the job. They had been given a challenging task of capturing the spirit of cities most had never been to, and display it in their work.

“My biggest challenge was shooting from four a.m. to sundown everyday in the heat,” explains Karlic. “That was probably the biggest obstacle, knowing I am only having 10 days to have experiences with people that I will never forget for the rest of my life.”

Given the more obscure choices of location, such as Lille, Arles and Toulon, many of the photographers are the voice of cities generally unknown by the rest of the world.

“A lot of Americans don’t go to Lille, they go to Paris or the South of France,” Schriber explains. “I was trying to capture the qualities that make Lille a charming city.”

There are indeed collateral benefits of having your cities be the subject matter of such talented youth. The Jeunes Talents program is a collaboration between ATOUT France (the French Tourism Development Agency), the French Cultural Services in Los Angeles and FLAX France Los Angeles Exchange. There is an evident ulterior motive to increase tourism in France’s less traveled regions. Still, the nature of the project and of the French cities does result in a brilliant portfolio.

“The collection of Jeunes Talent photographs has been impressive year after year in its array of expression and subject matter,” comments Benoit Chollet, the Director of ATOUT France for the Western USA. “Styles have ranged from surreal to naturalistic and have covered architecture, portraiture and landscape. Students bring back with them the kind of startling perspectives that can only be captured by fresh talent.”

But the photographers found more than beautiful architecture and landscapes through their travels. They also found a profoundly different view of life. Searching for meaning behind their imagery, the photographers would spend time interacting with locals and exploring their cities. Karlic discusses her most profound memory while on an excursion to a jungle in Tahiti.

“There was a word that doesn’t really exist in the English language, but they have a word for the state of mind, you would call it, or emotion, ‘fui,’ and it’s a moment where you are contemplating how you are supposed to be feeling,” Karlic explains. “You don’t have a definite understanding of yourself feeling happy or sad or enlightened or anything, but you’re just embracing the fact that you are alive or just in the world.”

Whether it was a trip to the jungle or a day in a farmers’ market, the young American photographers collected honest moments and powerful memories. The innovative Jeunes Talents program continues to produce an impressive collection of photography and provide American art students with an amazing opportunity. These talented photographers spent time in a foreign country learning a new culture, meeting new people and capturing the “fui” on the other side of the lens.