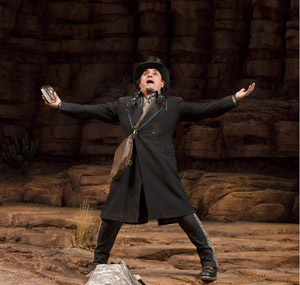 The World Premiere of “Palestine, New Mexico,” by Richard Montoya for Culture Clash, tells the story of Captain Catherine Siler (an edgy, strong performance by Kirsten Potter), who travels to New Mexico to personally deliver a letter to Private First Class Birdsong, played by a true American Indian, Russell Means. The letter was written by Birdsong’s son, a young soldier killed in the Afghanistan war.

“Palestine, New Mexico” is a story that deals with heavy subject matter, including politics, religion, family conflicts and how our beliefs are passed on to us and what we choose to do with these inheritances.

Despite the heavy material, there is great humor in the show as well. Leave it to Montoya, also playing the Top Hat, cruising on stage on his bike and jamming to music, to bring the laughs. Maria 15, the “medicine man,” played by Geraldine Keams, is whimsical and charming.

The set, designed by Rachel Hauck, sets the tone from the moment you walk into the theater with large red rock mountains similar to those found in Sedona. The lighting and projection design, by Alexander V. Nichols, adds to the intensity of the set. Christopher Acebo’s costume design heightens the richness of the production.

The cast is wonderful, but it is Montoya’s words that stay with you after the show is over, illustrating how one man’s inheritance connects him to a place far from home.