The Hangover, Inglorious Basterds and More 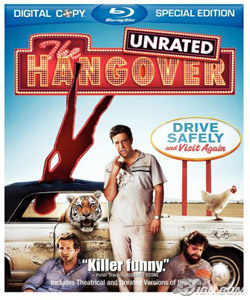 McG takes over the reins for the fourth installment of the franchise in Terminator Salvation. Christian Bale plays John Connor, now the leader of the human resistance fighting extinction at the hands of Skynet. Plenty of action and special effects drive this blockbuster. Sam Worthington and Helena Bonham Carter co-star.

The Idiotbox: One of the best sitcoms on TV, “Better off Ted” is an inventive satire of soulless corporate conglomerates from the perspective of the research and development department. Fans of “30 Rock” and “Arrested Development” will dig it. Portia de Rossi stars. The Complete First Season is now available.

The series that inspired the Harrison Ford blockbuster, The Fugitive: Season Three, Vol. Two, comes to DVD. Premiering in 1963, the show starred David Janssen as Dr. Richard Kimble, the man falsely convicted of killing his wife. After escaping custody he sets out to find the true killer, while Lt. Gerard tracks him down. In this penultimate season, the One-Armed Man’s identity is finally revealed.

Funny Business: The surprise comedy hit of the year, The Hangover stars Ed Helms (“The Office”), Bradley Cooper (Wedding Crashers) and scene-stealing stand-up comedian Zach Galifianakis. The film follows a trio of groomsmen who take their engaged buddy to Vegas for a bachelor party weekend and, in the process, lose him and their memories. Shenanigans ensue as they try to retrace their steps. Todd Phillips (Old School) directs.

Just in time for the holidays, The Mel Brooks Collection brings nine of the master of farce’s classic comedies to hi-def Blu-ray for the first time. They include: Blazing Saddles, High Anxiety, History of the World: Part I, Robin Hood: Men in Tights, Silent Movie, Spaceballs, To Be or Not to Be, The Twelve Chairs and Young Frankenstein. Also included is a retrospective book.

Stranger Than Fiction: Beautiful Losers is a documentary focusing on the community of artists that sprung up around a small New York storefront gallery in the early ’90s, that adopted the do-it-yourself outsider aesthetic of punk, skateboarding and graffiti into their various mediums. The group includes Shepard Fairey (creator of Barack Obama’s “Hope” poster), filmmaker Harmony Korine (Kids), pro skater Ed Templeton and Mike Mills, director of Thumbsucker and designer of album covers for Beck and others.

The Cove is a disturbing documentary exploring a town in Japan that captures and sells dolphins for entertainment venues and for food. Ric O’Barry, former dolphin trainer on “Flipper” turned activist, goes undercover to expose the slaughter.

Under The Radar: Paper Heart, a low budget mockumentary, stars Michael Cera and Charlyne Yi (the petite, bespectacled Asian stoner from Knocked Up) as a young couple making a film about their relationship. Ultimately, the film feels a little hollow.

When Remakes Attack: In time for Guy Ritchie’s update, delve into some of Basil Rathbone’s beloved turns as the master detective with two remastered Sherlock Holmes Double Features: House of Fear (1945)/Pearl of Death (1944) and The Spider Woman (’44)/The Voice of Terror (’42).

Also Available: Sticks and Stones, Poker Run, A Christmas Proposal with Tom Arnold, Familiar Strangers with Nikki Reed, Spread, Nothing Like the Holidays