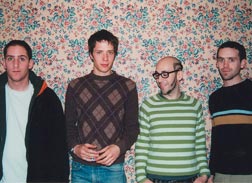 In a music world that is becoming more about intellectualism than pleasure (there’s a genre called math rock, for god’s sake!), making "happy" music can be seen as a kiss of death. This doesn’t seem to worry Chicago’s OK Go, whose songs have as many hand claps and "oooh ooohs" as Tim Armstrong has tattoos. "We are pretty shameless, happy, straight-up rock and roll in a way that is not particularly cool on the coolio scale, you know," confesses OK Go’s frontman Damian Kulash.

But going against the fickle "coolio scale" is perhaps what makes OK Go stand out as a refreshing guilty pleasure amongst the highbrow indie-rockers. As Damian explains, "If you live in a territory completely dominated by everybody who lives in fear of pop guilt and just playing pop songs, you stand out a little bit." The secret to OK Go’s irresistibility comes from the fact that even though their songs could make even Enya shake her booty, they still maintain their musical integrity. Their recent nationwide tour with the Vines proved their ability to play stand shoulder to shoulder with the big boys.

OK Go started as a group of self-described "nerdy" friends from Washington D.C., where Damian and Tim Nordwind had been playing in a band which had folding chairs for drums and borrowed guitars. Damian and Andy Duncan had another band in high school, while Dan Konopka was banging drums alone in Chicago. After Andy and Tim went to Chicago for school and formed a band with Dan, all that was left was for Kulash to finish up at Brown University and come out to Chi-town. After which, as Kulash says, "we were all ‘Bam!!’ back together."

And after that "Bam!" success was quick to follow. The band credits a combination of luck and timing, but part of their quick popularity stemmed from the fact that, included in the price of an OK Go ticket was choreographed dance numbers, free-style raps, and other wacky antics. "A lot of the most entertaining things to do when you get on stage is to be like, ‘Would anybody like to see me make a fool out of myself?’ And everybody wants to see that," explains Kulash. It was their flawlessly entertaining combination of great music and crazy on-stage behavior that drew quick crowds of, as Kulash says, "indie-rockers' girlfriends," and led them to tour with fellow funnymen They Might Be Giants. But Damian is quick to qualify their silliness with, "We don't take ourselves seriously, but we do take our music seriously."

It shows in their ability to acquire instant fans during their recent tour with the Vines. "We had met them [the Vines] last year because we recorded across the hall from them…So we used to go fuck with them," Tim recalls. "We'd run through their studio in our underwear and stuff, so it made them laugh." But even better than this friendly pairing of bands was the susceptibility of the Aussie rockers' audience to the sound and charm of OK Go. As Tim explains, "Their fans, they see us …and by song two or three, or by the fourth song, we've got 'em! It feels good to be able to get these people who have never heard us."

And though currently that number of people who haven't heard these boys is large, it won't be for long. With their self-titled debut album due for releases on September 17, the world will soon learn of the satisfying mix of intelligent and silly that is (no, not John Stewart) OK Go.