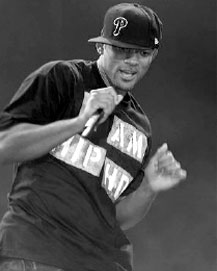 I am a music cynic, a snob really; the type who doesn't want to be spotted rockin' out at the G-rated, lip-sync heavy, Ryan Seacrest-hosted Wango Tango 2005. Seriously, my best friend couldn't spot me through the baseball cap and oversized sunglasses. But I have to admit that this year's show was the definition of a guilty pleasure.

KIIS-FM's annual summer saga is like a daylong musical assault by machine gun. Artists from the rock and pop world performed sets for 10 to 30 minutes, with as much time between breaks as during sets. It was advertising overload - about two and a half hours of mind-numbing filler between performances, on loop - but this was pop culture heaven, right?

The 80-degree daylight hours featured a peppering of flash-in-the-pan appearances from the likes of Latina star Natalie, singer-songwriter Ryan Cabrera, R&B teen heartthrob Frankie J, pop-punk quintet Simple Plan, Atlanta's hip-hopper Ciara and actor-turned-singer Lindsay Lohan. Of the opening acts, Ciara stole the scene with her sexy songs and crunky dance moves. On the flip side, Lohan was the biggest joke, with the origins of her breasts being the main topic of conversation during her too-long, 10-minute set.

The mostly female-teen crowd knew who was going to really "Get It Started," as the Black Eyed Peas brought the stadium to its feet, delivering danceable, intelligent tunes for all ages to enjoy. They stormed the stage for about 30 minutes - twice as long as any previous act and well worth it.

Winner for the day's biggest news flash: Kelly Clarkson, sporting a ripped vintage Rolling Stones T-shirt, put on a performance that was "not horrible." An obvious Jagger fan, she channeled Mick's energy and his flamboyant shtick, racing up and down the stage with mic stand in hand, belting out tunes at the top of her powerful and courageous vocal chords. Clarkson definitely gets an "A" for effort.

The reunited Backstreet Boys then took the stage, which drew invisible question marks atop all heads in the audience, questions weighted with perplexity and without possibility of a reasonable answer. Yet the young girls who paid $100 a ticket to have a folding plastic chair near the stage seemed to have gotten their money's worth just to see this has-been boy band sing their new and former songs, and, of course, snap a cell phone picture.

It is now clear, for those who weren't already aware, why J.Lo has a record deal. It's not just because Jennifer Lopez can sing, but because she is an entertainer with a dynamic live show. 'Fuck It' her T-shirt said to the delight of kids and the ire of the show's producers who bleeped out as many curse words as possible throughout the day Lopez danced her famous ass off and brought out NOFX's Fat Mike to perform "Hold You Down," a definite highlight.

Keeping with the mood, Will Smith and DJ Jazzy Jeff brought the house down in true hip-hop fashion, Smith proclaimed 'I am Hip Hop' on his T-shirt. The duo's set included roller-skating babes, trick-bike-riding dudes and plenty of "Getting' Jiggy" beats. Responding to the crowd's chants, they closed with the old-school hit "Summertime".

Bringing things back to the hometown crowd, Gwen Stefani was the act that local fans had waited all day and night to see. Certainly a disappointment for any hardcore No Doubt fan, Stefani sang a few of her teeny-bopper dance diddies from her solo latest release, Love. Angel. Music. Baby., over a track that was almost as loud as she was. She seemed to cater her performance to KIIS-FM's G-rated rules, censoring her lyrics for the kiddies singing, "This is my shhh..."

An odd act to follow the hometown diva, Ludacris took the stage as the baseball stadium began to empty. Luda played some hits and brought show-stealer Shawna - a lightning fast female rapper - onstage, but then failed to play the duo's popular song "What's Your Fantasy," which was a perplexing phenomenon.