Ice Skating in Los Angeles: Yes, You Can! 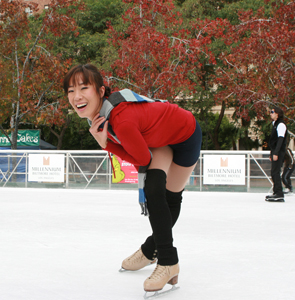 Have some icy fun at Pershing Square Downtown on Ice.
(Credit: David Tobin)

Remember when ice skating was the cool thing to do?

Maybe it wasn’t for you, but I was one of those kids who had surprising coordination and flexibility despite no training. I lived for gliding on the ice, falling, being cold, falling, going in a circle and maybe falling a little less every time around.

It was a very sad day in my life when the local rink closed. But the experience has not left me empty-handed. I can still skate at a decently fast speed and not fall. I can do the bunny hop, skate backwards and perform figure eights. Michelle Quan, move over.

And whether it’s winter or summer, Californians flock to the rink. It’s what we do best; we ignore the seasons, wear flip-flops all year long and go ice skating even if the holidays aren’t approaching.

Well, even if the weather tries to trick us, the Christmas season has snuck upon us again. It’s time to obsess over having the traditional “winter wonderland” December … without the daily tedium of snow.

We may not have the famous rink in Rockefeller Center or a quaint frozen lake to skate on, but the citizens of this beach town have found many places that will allow us to join the pastime that takes over the rest of the nation with the onset of winter.

Now the difficult part sets in: Which rink do you choose? The decision is not as hefty as buying a car or picking a name for your unborn child, but there are slight differences between various venues around town.

If you don’t know going into the decision what you want, you may not get the most yuletide fun out of the experience. So here is a guide to choosing your rink.

If you have children or are borrowing, stealing, babysitting some for the day, head to the outdoor ice skating rink at Pershing Square. Downtown on Ice (through Jan. 18, 2010) is celebrating its 12th season at the center. The admission price is the lowest in town – only six dollars plus two for skate rental.

The Pershing Square rink is also scheduling special events like a free concert series and a free Snow Zone, both of which are family friendly. The motivating factors for families to drag the kids in puffy ski jackets is mainly the fact that it is cheaper than all of the other places by two dollars (which adds up to an admirable saving when several kids are factored into the mix).

If you don’t have kids and want to enjoy the evening with that special someone in a romantic setting where there are sure to be lights, adorable shops to peruse and other cute couples helping to set the mood, there is an ice skating rink less than two blocks from the Third Street Promenade in Santa Monica, “Ice at Santa Monica” (through Jan. 31).

This one is very California appropriate. Not only are you minutes from the breezy coast but Third Street Promenade is always decked out in full Christmas attire. Admission is still relatively cheap. Ten dollars will buy you a ticket in, as well as skates, so guys don’t have to worry about spending a fortune on a date.

It’s the perfect place to go on Friday night to get out of downtown or Hollywood or wherever the bulk of your stressful day may reside. And how much do you want to couples skate around the rink, holding hands like they do in every romantic comedy?

Finally, there’s my favorite type of ice skating. Though there is a time and place for taking family outings and going on dates, every day should be celebrated with the friends you care about most.

L.A. Live in downtown is host to restaurants, concert venues, a new movie theater and now an ice rink, which is 70 by 50 feet and can accommodate 200 skaters at a time (through Dec. 31).

The center has an upbeat vibe that will get you and your friends rolling on the ice with laughter and holiday cheer. You can see a movie any old time, and bowling is so passé. Even if some of you are challenged when it comes to coordination, there is nothing more fun than gripping each other tightly and scooting your way across the slippery ice.

After all, ’tis the season to be with the ones you love.