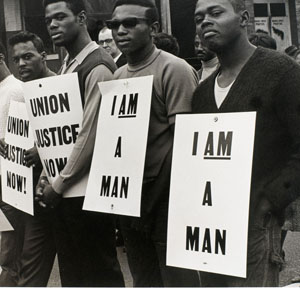 Call it compassion or political solidarity, but it’s a widely known fact that many Jews played prominent leadership roles in the early years of the Civil Rights Movement.

Whether it’s Rabbi Joachim Prinz (former president of the American Jewish Congress), who walked with Dr. Martin Luther King, Jr. at the famous 1963 March on Washington, Rabbi Abraham Joshua Heschel, who participated in the Selma to Montgomery March or civil rights workers Andrew Goodman, Michael Schwerner and James Chaney, who lost their lives for the sake of freedom, there was a symbol of alliance between blacks and Jews who came together to fight for a common cause.

With approximately 170 photographs by more than 35 photographers, the exhibit titled Road to Freedom tracks the 12-year span between the 1956 trial that followed Rosa Parks’ famed act of resistance aboard a Montgomery bus to Dr. Martin Luther King, Jr.’s assassination in 1968.

The largest exhibition devoted to photography of the Civil Rights Movement, it chronicles several historical turning points, such as the marches on Washington and Montgomery, and features a collection of photographs, some of which have never been displayed to the public, including iconic images like the Watts Riots of 1965, the picketing of the Kress Store in Pasadena in 1960 and the march on Pershing Square in 1965.

The stirring photographs depicting a segregated world of that era include the blood-soaked, bullet-ridden vehicle of Viola Liuzzo, a civil rights activist from Michigan who was murdered by Ku Klux Klan members, pictures of demonstrators being sprayed by firemen’s water hoses and numerous other moving images that capture dramatic events and expose injustices prevalent in America in the 1960s.

“In many ways, the history of the Civil Rights Movement cannot be understood without contemplating the photographs that helped shape public opinion,” says curator Julian Cox, who can be credited for selecting these priceless pieces from the High Museum of Art in Atlanta. “Most of the photographs were taken by professional photojournalists sympathetic to the cause and by activists motivated to record newsworthy events. These are among the most important and beautiful photographs of our nation.”

Road to Freedom has drawn popular and critical acclaim since debuting at the High Museum in June 2008 and has traveled to the Smithsonian National Museum of African American History and Culture in Washington, D.C., and the Field Museum in Chicago.

In addition to images by prominent photographers like Danny Lyon, the exhibition also features more than a dozen contemporary portraits by photographer Eric Etheridge of the Freedom Riders, Civil Right activists who rode on interstate buses into the segregated southern United States. These young men and women – both Jewish and black – converged in 1961 on Jackson, Miss., to challenge state segregation laws and were arrested and convicted of the charge of “breach of peace.” Now senior citizens, their pictures are also displayed alongside their original mug shots in Breach of Peace: Photographs of Freedom Riders By Eric Etheridge through April 1, 2010.

“The indelible images in Road to Freedom portray the hope and courage of the men and women who took to the streets and campaigned peacefully for social change,” remarks Robert Kirschner, Skirball’s Museum Director. “And the Skirball is proud to bring this remarkable exhibition to Los Angeles as part of its ongoing mission to promote justice, equality and human dignity in American life.”

Also accompanying these priceless photographs are archival objects and documents such as Rosa Parks’ police fingerprint paperwork and the blueprint of the bus on which she made her fateful stand. Her arrest report where she was “charged with refusing to obey orders of the bus driver” is on display in addition to an original literacy test dated April 30, 1955. This was a government practice of testing the literacy of potential black citizens in order to bar them from voting. There are also historical artifacts like newspapers, magazines and posters from that era.

Don’t miss other exhibition-related film screenings, lectures, tours, family programs and documentaries focusing on the role of Jewish Americans in the Civil Rights Movement, all at the Skirball Cultural Center.