Avatar: The Most Challenging Film James Cameron Ever Made 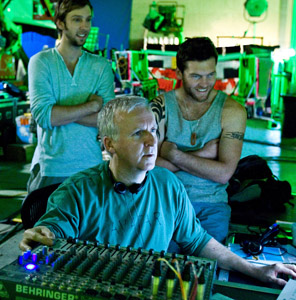 When the man who resurrected the Titanic, just to sink it again, calls something “the most challenging film I’ve ever made,” you know you’re in for quite a theatrical experience. James Cameron likes to break new cinematic ground, and his achievements have earned around $1.1 billion dollars at the box office to date.

But is the world ready for a $300 million 3D film with a cast partially comprised of CGI creations that morphed actors into 10-foot tall blue cat people? Cameron is banking on it.

His new film, Avatar, is a spectacle of groundbreaking, breathtaking proportions that required the director to invent multiple new technologies in order to fully realize his vision. Cameron has been working on the project since the 1990s, but had to wait until the industry advanced enough to catch up to his imagination. One of the most important components of filming was the process of motion capture in order to translate actors’ performances into animated characters.

“Every nuance and bit of performance was created by the actors,” Cameron continues. “[The actors] do all the things you see their CG characters do in the film, down to the slightest hand gesture. These characters are precisely and only what the actors created.”

Cameron explains that casting was pivotal in order to ensure his characters came across as honest, believable and rooted in reality, even those which were computer generated and living in a world that was entirely animated. The director was especially anxious about finding a male lead to play Jake Sully, a marine confined to a wheelchair sent, in avatar form, to a foreign land where he’s able to walk, fight and love again.

After months searching for the right actor, Cameron stumbled on Sam Worthington (Terminator Salvation, the one Terminator Cameron had nothing to do with), an Australian up and comer who the director felt had a “visceral quality and would make audiences believe that people would follow him. There was an intelligence and intensity in his eyes that never wavered.”

“I got a phone call to do this audition,” Worthington recalls, “but they wouldn’t tell me anything about the script or even who the director was. And I thought, ‘Well, here’s another waste of my time.’ Then, a week later, I got another phone call [saying] ‘Look, Jim Cameron wants to fly you to L.A. to audition for him.’ And I said, ‘Yes, but for what?’”

Once Cameron was convinced he’d found his star, the veil of secrecy was lifted and Worthington found himself at the center of one of the most highly anticipated films in recent memory and Cameron’s first feature full-length since the blockbuster success of Titanic in 1997. Rather than become overwhelmed by the pressure of such a mammoth project, Worthington dove in, head first.

“I take my work seriously, just like Jim takes his work seriously,” the actor explains. “We both come at the work wanting to give it everything we’ve got.”

What Worthington wasn’t fully prepared for was to be flung into the bizarre world of the bare motion capture stage, known as the Volume, while wearing special performance capture suits and headgear. Yet the actor found it to be an invigorating experience.

“Performance capture is incredibly freeing,” Worthington contends. “You can’t hide, so every take has to be truthful. At first it’s a little nerve-wracking, but you forget you’re wearing headgear and a few hundred dots on your face. We embraced the performance capture and had a lot of fun with it. Even though [my character] Jake’s avatar is 10-feet tall and blue, it has my personality and soul. It’s spectacular that Jim can do that.”

To help the actors, including Worthington and Zoe Saldana, who plays his love interest, prepare for a world they wouldn’t actually be able to experience, Cameron flew the cast to Hawaii. The tropical paradise was a stand-in for the environment Cameron envisioned for the film.

“We had to live without sophisticated technology, tools and comforts,” Saldana says. “I was almost naked for three days, digging and climbing and muddy like a dead rat,” she laughs. “I was missing creature comforts, and I was like, ‘I can’t deal with this.’ And Jim said, ‘Oh come on. Suck it up!’”

Later the actors were thankful to have experienced their tropical adventure.

“On this bare stage, which had no sets, we had to act as if we were in Pandora’s mud, water, humidity, trees, elevation, everything,” Saldana continues. “Being in Hawaii gave us a mental imprint we could [draw on].”

“I’ve always tried to push the envelope,” Cameron offers. “But this time it pushed back. So we had to push harder. I liken the experience of making Avatar to jumping off a cliff and knitting the parachute on the way down.”