The Young Victoria : A Queen for the Ages 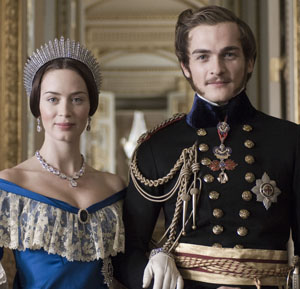 Emily Blunt and Rupert Friend in The Young Victoria
(Credit: Courtesy of Apparation)

The general public doesn’t know too much about Queen Victoria except that she spawned an era and had an undying love for her husband who widowed her young. The film The Young Victoria does quite a bit to change perceptions of the young queen. Victoria was not just a dowdy widower dressed in black.

The film focuses on a young Queen Victoria when she was just 17 years old. We become aware of her yearning for a sense of freedom and independence.

After her father’s death before the age of 1, she was the only living heir to the thrown. Hence, she was fiercely protected. Queen Victoria was not allowed any autonomy, friends or amazingly, even her own bedroom.

She longed for her own personal liberation. A month after her 18th birthday, she gained not only that, but an empire. She was named Queen of England in 1838.

Victoria knew that she would soon be a chess piece in the global game of gaining world control. Unfortunately, she had to take a husband to maintain her thrown and power.

A match was made for her with her cousin Albert, who she first dismissed as an appropriate suitor, toyed with and made clear that she was in no rush to marry. Eventually their feelings turned to true love, which contributes a surprise additional story arc.

French-Canadian director Jean-Marc Vallée (C.R.A.Z.Y.) brings forth a fresh perspective in The Young Victoria, starring Emily Blunt, Rupert Friend and Paul Bettany, among many others.

“I was touched by their love and wanted to tell this beautiful story,” states Vallée with a cool ease.

Sarah Ferguson, Duchess of York and a producer of the film, is the great-great-great-granddaughter of Queen Victoria. She started to develop the idea around 15 years ago, and was determined to tell her narrative.

“I pitched the idea to Graham King [producer] awhile back and was positive that this story had relevance, and a deep love story that needs to be told,” the Duchess elegantly states.

King was really excited about the idea of this great love story, assured Ferguson originality was key, and added that there hadn’t been any great love stories told in awhile.

Now that the project was green lit, a cast needed to be put together. This is where the fabulous Blunt chuckles to herself, remembering when the script crossed her path: “I knew that there was going to be a wave of wanting girls for this part, but that I would really love a go at it, and to let me do it!”

King states, with a thick English accent, “When Emily walks into a room, you feel a real presence with her, and she was a perfect fit for this role.”

Blunt smiles coyly, stating, “Victoria had this unabashed courage about her, and she married a man who loved her selflessly ’til the day he died. He is what a woman should look for in a man because he had a quiet confidence and refused to be emasculated by her, but wanted to work along [with] her.”

The story also garnered the attention of Friend, who was perfectly cast as the young Albert.

“He is unlike anyone we admire today, totally selfless, and one of England’s great undersung heroes,” expresses Friend.

Blunt quips, “Rupert and I had such a great chemistry, which really helped, and by the end of filming we were quite infantile! He was like a brother to me.”

All agree that without the help of the Duchess, they would not have been able to gain the access to private letters written between the two, beautiful locations and royal archives.

Vallée states, “Being able to see the actual letters, touch and feel them, was very special.”

Yet, the Duchess has a different take: “Without this amazing team, the film never would have come to fruition. I come to this so humbled and without words that they have all honored Victoria.”