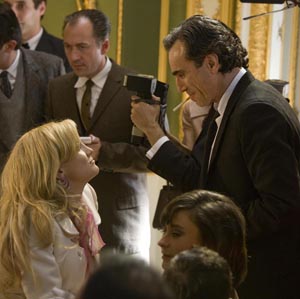 If you don’t know his name, you should really start doing your homework. So here’s a little history lesson for those of you who aren’t as well versed in international cinema as others.

Federico Fellini was an Italian director who revolutionized the film industry. His movies are characterized as highly eccentric and fantastical in nature. They play with imagery from the Baroque era and allude to a dreamlike state of being.

Though he was a cinematic genius, Fellini was plagued with his own demons. He was diagnosed with depression and was often haunted by his work in vivid dreams.

It was in one of these dreams that the director created his 1963 Oscar-winning film, 8½. Analyzed and studied by film historians, Fellini’s surreally magical masterpiece is one of the most influential of all time.

In 1982, composer Maury Yeston and writer Arthur Kopit transformed the film into a Broadway hit, winning five Tony awards in its first year. They thought the added elements of song and dance would bring Fellini’s 8½ up to an appropriately titled Nine.

It is not Fellini, but Guido Contini (Daniel Day-Lewis) who is the lead, a 1960s movie director with an impressive resume and every important person in the industry at his beck and call. His much-anticipated movie, Italia, is about to go into production without a script and with a maestro who is unable to find inspiration for the epic film.

Inspiration and temptation enter his life in the form of his sexy mistress Carla (Penélope Cruz), his loving wife Luisa (Marion Cotillard), his confidante Lilli (Judi Dench), a flirtatious journalist (Kate Hudson), an actress he casts in all of his films (Nicole Kidman), a prostitute from his childhood (Fergie) and his long departed mother (Sophia Loren). Contini’s only way to escape his approaching deadline and failing marriage is to enter an imaginary world where the women play pretend on the elaborate stage of his dreams.

I love a good musical, and when I learned Chicago’s Rob Marshall was directing, I couldn’t wait to see this one. But there is an invisible barrier present, one that the everyday moviegoer may not be able to overcome.

Behind the elaborate sets and costumes, dark sunglasses and Italian posh, there is an elitism as frustrating as it is unbearably dense. The film is enjoyable, and the cast really earns the big bucks they’re being paid. But past the glitz of the sparkling costumes and fancy footwork, I’m not sure Nine lives up to the decades of prestige on which it’s built.