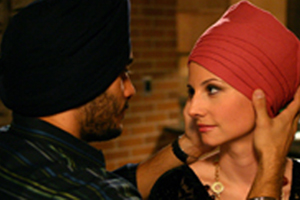 Forrest Gump once likened life to a box of chocolates. Shedding his own Sikh-influenced perspective on the matter is Amrit Singh. He must come to terms with his religious scripture that life is like an ocean of pearls.

The central character in Ocean of Pearls, Amrit, is a young medical doctor with a promising future who has everything he needs in Toronto – a steady job, a caring family and loving girlfriend – only he does not realize it until he faces a series of racially discriminating events during his ambitious pursuit of a prestigious hospital position in Detroit.

Born and raised in a conservative Sikh family, Amrit sports a groomed beard and dons a turban to cover his uncut hair, just as Sikhism ordains him to do. As a young man growing up in the Western world, Amrit questions the necessity of wearing a turban and keeping his hair long, thinking the tradition as too much a liability.

Case in point, he is discriminated against at the airport, at a nightclub and at the very place he works – all because of the way he looks. He soon believes he must ditch the turban and the long hair in the name of moving his career forward.

As he begins to cope with the repercussions of his actions, Amrit suddenly struggles to come to the terms with the issues he thought were so easily resolvable. The answers are no longer black and white. Along the way, he has to decide the fate of the life of another – that of a dying patient.

Through it all, the film is about the struggles of a young Indian trying to balance his traditional Eastern culture while being brought up in the modern Western world.

A story of inner conflict and personal discovery, Ocean of Pearls is the first film by director Sarab Singh Neelam, which he co-wrote with V. Prasad. It explores the examination of values by individuals, families, working professionals and society at large.