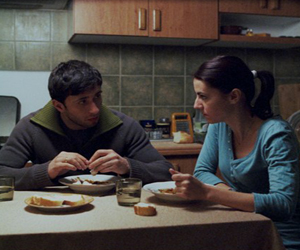 What is the meaning or context of a word? Many times we say things without stopping to think about the actual implications of our words. How do we decide whether or not our belief and knowledge of the word is accurate? The new film, Police, Adjective, by Romanian director Corneliu Porumboiu, delves directly into the crux of terminology.

Police, Adjective tells the story of a young undercover cop, Cristi, living in a post-communist small town in Romania. Cristi is on a case that requires him to tail a young teenager accused of offering a joint to his friends.

His boss wants the teen arrested and thrown in jail for supplying drugs to his fellow classmates and an opportunity to get his supplier. Cristi believes that the word “offering” drugs is not sufficient cause to arrest him and ruin the rest of the teen’s life. Hence, this interpretation plays heavily on his “conscience.” Should he do what the law requires, or what he knows in his gut to be right?

The film uses very little jump cutting, and takes a traditional and real approach to filmmaking. When we follow Cristi throughout the film during his surveillance of the youth, it feels like we are actually partaking in a live surveillance.

Very little action happens throughout the film, and the slow pace doesn’t make it easier on audiences. The scenes between he and his wife offer a nice reprieve to the film and give us a break from his tedious observation. They pore over and discuss the meaning of symbols vs. images, and the usage of grammatical errors and the misspellings of words. His wife informs him that the Romanian Academy decides these definitions, which are held up by law.

The director casually integrates this discussion into the film in such a meticulous way; we as the audience know to pay particular attention.

You can see that Cristi is a progressive thinker and knows that Romania will eventually catch up to the rest of the European nations in regards to marijuana.

The film asks how do you define law, police, personal responsibility and moral law? All of these questions get answered in a final scene between Cristi and his higher ups with a perfect amount of reverence and biting humor. Police, Adjective is an eye-opening film that delves into modern day Romania and an impending change that has been long overdue.