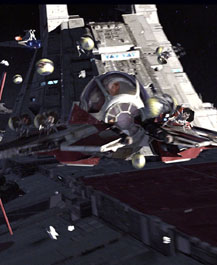 The climax for George Lucas’ entire Star Wars series comes in a blaze of fire and darkness, wild light-saber battles and enough Sturm, Drang and digital pyrotechnics to fill multiplexes from here to Tatooine.

Like some grand, crazy Moebius strip of fantasy and adventure, Star Wars: Episode III – Revenge of the Sith, twists back on itself to end where it began, with all the players and puzzle pieces finally explained and set in motion, ready for the events of the first Star Wars film (1977’s Episode IV: A New Hope) to start all over again.

Is that a spoiler? Yet who in the world doesn’t know how this Star Wars is going to finish: with Anakin Skywalker (Hayden Christensen) making his last metamorphosis and the Evil Empire rising? Actually, it’s hard to think of any big popular movie entertainment that has ended – or appeared to end – more horrifically and tragically than this one, with not just characters we may like, but an entire planet, galaxy and way of life going up in flames.

It doesn’t matter, of course. I enjoyed the movie. Even though many critics have been rough on the last two Star Wars (1999’s The Phantom Menace and 2002’s Attack of the Clones), this one is a smashing success on its own terms, achieving exactly what Lucas wanted and carrying most of its viewers where they want to go.

It’s also the scariest, most exciting, most visually prodigious of the sextet, with action sequences that explode off the screen, characters who finally awaken your sentiments (a bit) and images of violence, inferno, chaos and the dark side that descend like a shroud of noir.

Revenge of the Sith begins with an amazing, bang-up air fight – led by young Obi-Wan Kenobi (Ewan McGregor) and Anakin, whipping through the skyscrapers and alleys of city-planet Coruscant – and ends with awesome visions of destruction, a fantastic plunge into the abyss.

The story that charts the last stages of the eventual Evil Emperor’s insidious plot to overthrow interplanetary parliamentary democracy and replace it with tyranny and horror is enhanced by incredible digital imagery. CGI bears the actions from the violent battles with renegade Jedi Count Dooku (Christopher Lee); to starchy parliamentary debates presided over by Chancellor Palpatine (Ian McDiarmid); to intrigue on the Jedi council; to the tragic love of Anakin and Padme (Natalie Portman); to Obi-Wan’s grand military adventure; to Yoda’s swashbuckling Errol Flynn act; looks at the series’ most persistent characters, robots C-3PO (Anthony Daniels) and R2-D2 (Kenny Baker)-and, finally, to the blinding terrors of the dark side of the Force.

All of this approaches a darkness even deeper than that of 1980’s The Empire Strikes Back, the critical favorite of the entire series, and earns this movie the series’ first PG-13 rating.

Yet the final effect is exhilarating. The gloom and tragedy are muted because we know the real end of the story, the fireworks-fantasy celebration of the Evil Empire’s end, set decades later, in 1983’s Return of the Jedi.

Lucas has constructed the whole last half of the epic double trilogy something like the flashback solution of a mystery story, though by now little of it is a surprise. As he writes finis to a project that has preoccupied him for most of his moviemaking career, he achieves once again, at his best, technological marvels and storytelling delight with characters who (Yoda charmingly excepted) have become endearingly stiff, trading dialogue that’s beguilingly clunky.

Now, as he puts a close to the epic (if not to the merchandising), we can feel something for which many critics never gave him enough credit: the real affection and personal joy he took in these movies, the ways he fussed and fretted over them, and the ways he ignored the Hollywood establishment and forged his own relationship with the audience. Perhaps it’s that personal investment in what is usually the impersonal blockbuster form that really bothers Lucas’ most intelligent critics. They may feel that ambition should be saved for less silly stuff.

But throughout his career, Lucas, like his comrade and colleague Steven Spielberg, has gotten a raw deal from some for bringing pleasure to audiences. All the Star Wars movies will continue to entertain us for many years to come. They were grand fun, and this last one’s a corker. That’s all the defense they need.