DJ Irene: Fascination in the Dissonance 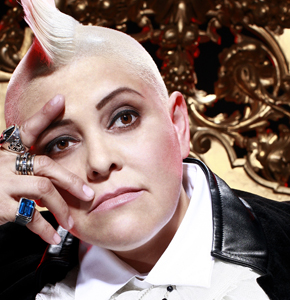 DJ Irene has been accepted to CSUN.
(Credit: Lionel Deluy)

Los Angeles’ own DJ Irene has built an impressive career in the electronic music scene. Playing in what most would argue to be a young man’s game, the energetic “diva of dance” is a force to be reckoned with.

Her new mix album, Dissonance, ends a brief hiatus for DJ Irene and is largely a product of her continuing collegiate education in music theory and composition. I was fortunate enough to have the opportunity to speak with Irene and chat about her new album, and the history behind dissonance.

“Twentieth century music is basically [that] people were tired of classical music, and just like every generation of people, they want something new,” Irene explains.

The name Dissonance is in fact a reference to her fascination with the 20th century classical atonality movements of Stravinsky, Schoenberg and Debussy. The mix itself surprisingly opens with Stravinsky’s “The Rite of Spring.”

By that definition, it would be easy to describe DJ Irene’s own musical career as dissonant. DJ Irene has toured extensively and explored musically for over a decade with no retirement plans in sight. But the disk jockey education of DJ Irene, née Irene Gutierrez, aptly first began while attending college:

“I met a guy that knew how to DJ,” Irene recalls. “I asked him to teach me, and he did. That’s how it all started.”

Whether that guy knew what “it all” would come to mean or not, Irene used those lessons to start a career. Beginning in the late ’90s, DJ Irene released mix album after mix album – often amounting to several original releases per year. Her newest 17-track mix actually opens and closes with a pair of original compositions, “Wreck my Dissonance Bitch” and “Where’s My Bitch (Sex Crazed Loudmouth Mix).”

I also ask Irene about her first big break:

“I used to have house parties,” Irene explains. “Sooner or later, I started working at clubs because of my reputation of throwing good parties and the following I had, and I basically ended up at Circus and Arena. I worked there for 14 to 15 years.”

Given the high turnover rate of Hollywood hotspots, maintaining a successful residency at a club in Los Angeles for over a couple years is nearly impossible, let alone 14. The longevity of Irene’s career is even more impressive when you consider that for the vast majority of it, there really was no Internet promotion, no Facebook event and no text message.

“When I started doing Friday night, it became word of mouth; everyone was just having a good time,” Irene recounts. “And that’s when I came out with the first CD, and the rest is history.”

But that history wasn’t all raves and parties. DJ Irene survived a troubled childhood, countless nights sleeping in her car, discrimination over her sexual orientation and a prolonged haze of meth addiction. Nevertheless, with an incredibly positive demeanor and infectious laugh, Irene endured – long enough to see those that she inspired on the turntables return the favor.

“Nowadays there are so many young kids that I am inspired just watching them because I’ve seen the culture grow,” Irene says. “That’s how I see these young kids, they take it somewhere else.”

Now, it is Irene’s turn to take her abilities “somewhere else.” Irene has returned to the place where her DJ career started: college.

Currently wrapping up her degree, DJ Irene has already been accepted to a program at Cal State Northridge to study commercial and media composition. Her future plans include pursuing a master’s and working towards a doctorate while continuing her music career.

Like her educational aspirations, Dissonance displays a commitment to growth and embracing change. So, as DJ Irene, future Ph.D., describes her aversion to pre-set playlists, I can’t help but hear it as a self-reflection of her boundless, dissonant journey:

“Have you ever traveled – you wanted to go somewhere, but you didn’t plan it? You were just like, ‘hey, let’s go?’” Irene asks. “It turns out to be the best vacation you’ve ever had.”