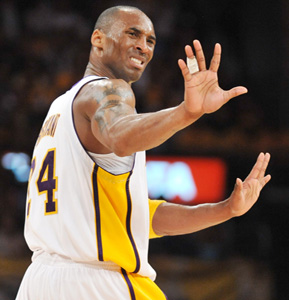 Despite Laker guard Kobe Bryant fracturing the index finger on his right (shooting) hand in the first quarter of last Friday night’s game against the 3-21 Timberwolves at Staples, he acquired a team-high 20 points. Pau Gasol accumulated a career-high 20 rebounds along with 17 points and seven assists. After the solid 104-92 win over the T-wolves, the 18-4 Lakers embarked on their first real road test of the season. The series of five away games began in Utah Saturday against the 14-9 Jazz. EnergySolutions Arena is always one of the loudest, toughest venues for teams to visit, especially after having played another game the night before. Unfortunately for the Lakers, their 11-game win streak came to a screeching halt at the hands of the Jazz and their rambunctious fans. Although Los Angeles deftly beat Utah 101-77 Dec. 9 at Staples – outscoring the Jazz 28-6 in the fourth quarter – Utah gained redemption with the 94-102 win. The Jazz pulled away with the lead in the second quarter and maintained it for the rest of the game. Bryant, suffering from a stomach illness as well as the broken finger, proved no match for Ronnie Brewer, coming away with just 16 points versus Brewer’s 19. The Jazz’s Deron Williams led all scorers with 21 (and 11 assists), while rookie Wesley Matthews scored a career-high of 19 points, plus six assists. As a team, Utah finished with 29 assists. Laker forwards Ron Artest and Gasol also scored 16 points. Gasol matched his career-best rebounds record for the second night in a row with 20. The road journey continues this week as the Lakers travel to Milwaukee (11-11) Wednesday, New Jersey (2-22) Saturday and Detroit (11-12) Sunday.