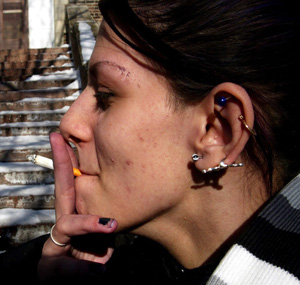 Southern Californians are known to be relatively health conscious (or overly obsessed with keeping their weight down, depending on how you look at it). San Louis Obispo was the first city ever to officially ban smoking in all indoor public places in 1990, and the state followed suit in 1998.

Since then California’s desire to ban smoking altogether has been increasing to fever pitch, with some areas outlawing it in ALL public places. For those of you doing the math at home that means smokers will only be allowed to indulge at their own homes.

For some, the idea of a total smoking ban seems like a magically fantastic idea: no more having to walk through the secondhand smoke of those “cancer sticks,” more people trying to quit, possibly even more productivity with fewer workers taking routine smoking breaks. But for others, the mere mention of a smoking ban leaves them filled with the dread associated with the absence of that necessary nicotine, and no one needs to see what the nicotine deprived turn into without the stuff.

Unfortunately for those cigarette-addicted Angelenos, the Los Angeles Times reports that Los Angeles City Council sides with the nonsmokers. While it’s not quite up to speed with Santa Monica’s city smoking bans (Smoking has not been allowed in outdoor common areas of condos and apartments since February.), Los Angeles is trying to strengthen its laws, step by small (or maybe not so small) step.

On Dec. 8, the Arts, Parks, Health and Aging Committee agreed to a proposal that will prohibit smoking in outdoor dining areas and within 10 feet of any food establishment. And I’m sorry to tell you, cigarette lovers, any space within 30 feet of a food truck will henceforth be considered an outdoor dining area, and, on the urging of Councilman Greig Smith, a clause was rejected that would allow larger restaurants to create designated outdoor smoking areas. But on the bright side, the new measure won’t apply to bars and nightclubs with an 18-year-old age requirement, since we all know that’s where being able to have a smoke could be the difference between scoring a hot date or going home alone.

The committee has not officially enacted the plan yet, and as of press time, they’re still expecting to have a final meeting so the council can officially vote on the matter before the end of the year (you know, all two weeks of it), but they have not yet set a date.

Violators could face a fine up to $250, but once the ban is actually approved, there will be a one-year grace period in which the city will rely on the restaurants to notify their customers of the new regulations without any real enforcement of the law.

While some nonsmoking Angelenos rejoice, some smokers and First Amendment proponents worry what this step may mean for the future. It’s not unheard of for cities to ban smoking in all but a person’s own house (Even then, owners can’t smoke if their house is being used for business.), but while one of the council’s stated reasons behind the ban is to help reduce air pollution and increase overall health, a few concerned citizens – both smokers and nonsmokers alike – see this as yet another measure taken by an overly involved city towards limiting the freedom of the masses and regulating everyday life.

Some concerned nonsmokers have even pointed out that while it really would be nice to take advantage of the California sun while enjoying a meal outside without worrying about the smoker at the next table ruining your food, Los Angeles seems to be on a slippery slope with this one. I mean, first the State forces fast-food restaurants to eliminate trans fat from their menus, then they ban smoking. It does make one wonder what’s next and where it ends.

But for now, smoking is still legal in public places, and the new measures seem a little more like imposing common courtesy instead of forcibly wresting public freedoms from the hands of the citizens.