Against Me!: Speaking Out 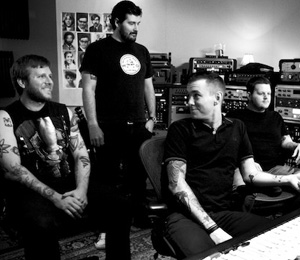 Against Me! have been hard at work in the studio on the forthcoming White Crosses.

It’s been over two years since Against Me! released their breakthrough, New Wave, which spawned the hit single “Thrash Unreal” and became one of 2007’s most critically acclaimed albums.

“We’ve been working on this record for, like, a year now,” frontman Tom Gabel admits. “We’ve really thrown everything we have into it, so I hope people like it.”

The band hopes to have it out by late February or early March and are currently in the mixing stage, a process Gabel refers to as “long and drawn out.” The album will be titled White Crosses after the song of the same name, and it’s purposefully ambiguous.

“I thought it was a title that was open enough to interpretation that everyone could get their own thing from it,” Gabel explains. “It’s not necessarily dictating what the album is about or anything. The song itself is about a specific thing, but as an album title it lends itself well to being open.”

“We all love working with Butch, and we’re honored to work with him. As long as he wants to work with us, we’ll keep making records with him,” Gabel says. “As far as this experience compared to the last one, a lot more attention [went] into the beforehand process of working out melodies. There was a lot more of the preproduction process before actually going into the studio.”

That main difference turned out to be key for the band; in the past they usually wrote new material on the road and then went directly into the studio to record.

“With this record, we finished touring for New Wave and took a break, and then started writing and working on the record,” Gabel describes. “We decided when to go into the studio based on when the songs were ready. It was more relaxed of a process.”

As far as what the new songs sound like, Gabel hints they will continue with the rock sound the band laid down on New Wave, with some subtle differences, of course.

“I think a lot of people thought that was a very rock record compared to earlier work,” he says. “I think this record is even more so a really aggressive rock ’n’ roll record, for lack of a better term. Call it a punk record or whatever you want. I’ve heard other people say it’s very masculine. I don’t know if I like that, but that’s what I’ve heard other people say.”

Meanwhile, life apart from Against Me! has yielded much fruit for Gabel. Last year he released his first solo work, Random Hearts, a venture he would love to do more of in the future.

“It’s a great outlet for extra creativity and songs,” he admits. “I feel like sometimes it’s great to spend a lot of time working on a record and spend six, seven months on it, but sometimes it’s really nice to write a couple songs in a month, record them and put them out. I feel like I have more of an ability to do that just under my own name than the band name.”

In addition, Gabel and wife just had their first child a month ago, a baby girl who admittedly has turned his world upside down.

“It’s pretty crazy. I feel like I’ve done a couple back flips and been turned all around,” he confesses. “I don’t even know which way the right direction is.”

One of the things Against Me! are well known for over their 12-year history is their political views, which have always integrated naturally into their music. While White Crosses is sure to contain Gabel’s trademark outspoken and personal wordplay, the designation of being political is something he never sought after, and he prefers to leave it up for listeners to decide.

“I feel like the title of being a political band was something that other people gave us and not something that we necessarily asked for,” he explains. “I’m fine with it, I understand it, but I’m just writing songs. I have opinions on things, and I’m expressing those opinions. If other people think they’re political then that’s fine, but I’m not setting out with the goal of we’re going to write political songs and we’re going to be a political band. I’m just speaking my mind.”

Against Me! Will perform Dec. 17 at Spaceland and Dec. 19 at the Troubadour. For more information, visit againstme.net.