Leopold and His Fiction: Drop Your Barriers 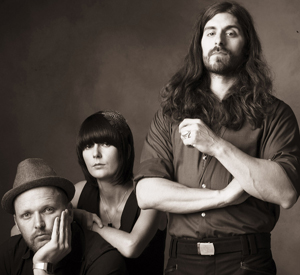 With his cat wailing in the background, Daniel James found himself in a pensive state. The question of whom or what has had the most influence on his music would be a continuing question to be answered and re-answered during our phone interview. James seems shy, deeply contemplative and lost in his thoughts whenever he speaks.

As founder and lead singer of San Francisco-based trio Leopold and His Fiction, James’ band has been likened to Bob Dylan’s lyricism, the Who and most of all, a type of revival of the White Stripes. However, their music exudes its own type of persona: stripped, raw and unabashed with catchy blues guitar riffs and country style harmonies. It’s as if the band came straight out of a Woodstock documentary but with a lonesome folksy twang that can place them touring with the Monsters of Folk.

“We are definitely influenced by what is old, and a lot of the classics. I’m just trying to keep my interpretation of it,” says James.

The band originally began as a duo but soon evolved when bassist Micayla Grace and drummer Jon Sortland joined the band two years ago. James explains that the trio collaborated to produce Leopold’s eclectic fusion of musical genres that range from British rock to American Blues, jazz and folk.

“They bring a modern twist, a cohesive blend of what they bring and what I bring seems to be working,” he says.

Their recent album, Ain’t No Surprise, has received numerous praise from critics this past year, and the band has been touring and working on their third album ever since. In between tour stops, besides the usual “driving, shopping, playing and eating,” James finds himself constantly influenced by his surroundings. Though he’s lived in Detroit, the heart of Motown (and coincidentally the birth place of the White Stripes), James didn’t start writing music until he was in San Francisco, a place where the music scene and hippy fashion is evident in their live performances.

As a fiction writer, the band’s name derives from a novelette James wrote with Leopold as the main character, a type of pied piper who brings his own stories from town to town, expanding the world of each place he visits – somehow, a coincidental and befitting story of Daniel James himself.

“We’re really excited when the audience is as into the music as we are, with people feeding off of it. It’s really kind of them losing themselves as they are watch us lose ourselves [on stage],” explains James. “We are trying to get people to drop their barriers and forget where they are.”

This may even be true listening to their music outside of a live performance. In ballads such as “Tiger Lily,” Leopold and His Fiction take you into a dreamlike state of simplicity and longing accompanied by soothing lyrical and acoustic harmonies. More upbeat tracks employ elements of psychedelic funk such as “Go On Have My Way” and “Ain’t No Surprise,” providing effects that will have you dancing like you were at a midnight rock ’n’ roll corral.

James acknowledges, “This music can fit in 40 years ago. If the audience was as comfortable with the music now as they are then, than we are doing the job that we set out to do.”

By the end of our interview, James is able to conjure some answers of current and past musical influences. His list is as broad as his current sound: the Doors, Yeah Yeah Yeahs and specifically, country music cult icon Townes Van Zandt.

The last show of their current tour takes place at Spaceland and will be the final culmination of their debut, with a gathering of family and friends in attendance. Afterwards the band will take a break for the holidays and reassume the release of their third album early next year.

According to James, “Four years leading up to this, it really feels like something is happening now. It’s been the best year of my life in this band.”

Ain’t No Surprise is currently available. Leopold and His Fiction will perform Dec. 22 at Spaceland. For more information, visit leopoldandhisfiction.com.