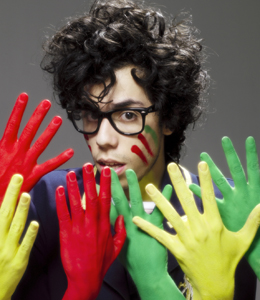 When one sees 20-year-old Yanis Sahraoui walking down the city of chic, it’s difficult not to give him a second glance. The twiggy Frenchman is a human rainbow, displaying more colors than a freshly opened Crayola box. A mop of thick, dark curls cascade down to his heavy black frames, and he prefers to make a statement with a loose canary yellow cardigan, royal blue polo, stormy skinny jeans and glossy orange sneakers.

Resembling a kooky hipster with an artist’s passion for color, Sahraoui, who goes by Sliimy, could easily lead a curious crowd with his wardrobe alone. It’s no wonder that he’s managed to get some of America’s biggest hit makers, such as Miley Cyrus and Taylor Swift, Tweeting about him, as well as the Queen of All Media raving.

However, it’s his sweet as candy voice, not his Technicolor wardrobe that made him an online musical phenomenon. The MySpace kid has successfully attracted millions of viewers to his sunny, feel-good pop singles and was the first artist signed to Perezcious Music – celebrity blogger Perez Hilton’s label with Warner Bros.

“There is definitely a connection between music and fashion,” Sliimy, who recently sat front row between Katy Perry and Dita Von Teese during Paris Fashion Week, declares. “If I ever do some designs, it’s definitely going to be connected to my music. Maybe I’ll do that with my second album. I have lots of ideas.”

Like Sliimy’s fashion, his music is rich in childlike elements with roots from David Bowie and Oasis as inspirations, leading to the former choirboy showing off his velvety vocals, belonging to a love child of a young Prince and Lily Allen. Growing up in the small town of Saint-Etienne, Sliimy began composing music and posting tunes online, including an acoustic cover of Britney Spears’ “Womanizer.”

In November 2008, Hilton posted the single on his site, and once he launched Perezcious Records, Sliimy was instantly signed – the opportunity of a lifetime for the budding singer.

“I was already signed to Warner in France, so he took my music and brought it to the States,” Sliimy explains. “I was freaking out, but it was a great experience. He’s such a giving person.”

Upon hearing his debut album, Paint Your Face, there’s no denying why listeners first assume that the pop singer is a lady. His whispery, sugary vocals are lush and feminine, causing the press to describe them as a “sad English woman.” Upon hearing this, Sliimy, who’s quietly sipping on water, spits out his drink and giggles.

“It’s such a strange description of my voice!” he exclaims. “It’s too bad they have to put me in a box like that, but I take it as a beautiful compliment. I love British culture. I don’t mind being a sad English woman.”

Despite the comparison, Paint Your Face was a way for Sliimy to overcome his loneliness, giving him the creative license to touch on melancholy themes, including his mother’s death. “Mum” is a heartbreaking ode where he displays his yearning to be with the woman he loved and lost at age seven. Like any great artist, Sliimy has transformed his personal pain to public art.

“I’m still shy, but music is my only way to explain who I am. It’s a kind of language for me,” he shares. “Music is my answer. It became my therapy, my happiness.”

Since recording Paint Your Face in a home studio, Sliimy has opened for Britney Spears, reached No. 2 in France and his album has been certified gold. He gushes how he loves Lady Gaga and would want to do “Paparazzi” as his next cover. In addition, he’s set on performing again in the United States, particularly in San Francisco, where he can connect with American listeners.

“When I’m on stage, it’s different,” he states. “I talk with my music, and people give me lots of love. Music is magical.”