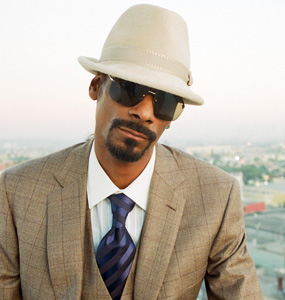 Now that his new album, Malice in Wonderland, has dropped, what’s Snoop Dogg up to? Telling you where to go, that’s what!

The Boss Dogg has completed work on a Voice Skin for the Tom Tom GPS system so now you can navigate to Snoopafied directions such as “ake a lizzeft, biatch” and “turn around when possible and keep it ‘G’, ya d-i-g?” Users can also download a “points of interest” file where the rap star directs you to some of his favorite spots in Los Angeles. Details at VoiceSkins.com.

The set features 19 tracks and includes covers of familiar favorites like “Rudolph the Red Nosed Reindeer” by Sheila E., “Feliz Navidad” by Chicoa and “Winter Wonderland” by Billy Idol as well as lesser-known songs like “A Christmas Compromise” by the Bird and the Bee. Some of the other contributors are Andy Vargas, Breakestra, Teresa James, Bird York and Peabo Bryson with Paige O’Hare.

Preview the entire album and find purchase details at myspace.com/SHKHolidayCollection.

Girls, if you like metal and your calendar is open for Thursday, Jan. 21, how about seeing Five Finger Death Punch, Shadows Fall, Throwdown and 2 Cents for free?

The bands are offering the special treat for the ladies in most of the cities on their Winter 2010 Tour route, including the late January show at the Anaheim House of Blues. All you have to do to get in gratis is be one of the first 100 women in line on show day.

You’ve heard of a get-out-of-jail-free card, but you’ve probably never dreamed about getting in for free. But you’ll like this trip to the slammer; underground journalist Ryan Bartek is offering The Big Shiny Prison, his book of “extreme road journalism,” as a free PDF file.

Bartek spent a year on the road to gather information to write the 300-plus page book, traveling from town to town with little money and crashing on couches in order to conduct interviews with members of dozens of bands, including groups like Cephalic Carnage, Ratt, Pig Destroyer, Kylesa, Jakked Rabbits and Peppermint Creeps.

“Readers may be horrifically alienated/insulted by the views of some in this book,” says Bartek. “I endorse none but my own and I think it’s fairly obvious where I stand.”

Find a link to the free download at myspace.com/bigshinyprison.

What would Frank Zappa’s music have sounded like if he had been fond of the banjo? Maybe a lot like the new self-titled album from Seabrook Power Plant, the group led by guitar and banjo shredder Brandon Seabrook.

If you’ve never banged your head to banjo before you’ll be surprised at the power Seabrook gets out of his tenor four-string on “Peter Dennis Blanford Townshend,” an homage to the Who’s Pete Townshend. And just like with Zappa, no two successive songs sound alike; Seabrook’s music lurches from sludgy power trio stuff (without banjo) to speedily picked Primus-flavored numbers.

Why use the banjo on these cuts?

“I’m not trying to be silly,” says Seabrook. “I just wanted to show that even though the banjo is gimmicky, it’s also not.”

The new “Tony Hawk: RIDE” video game comes with an amazing new feature; a wireless skateboard controller that allows players to control the action by performing various movements and gestures on the board that directly translate into tricks on the game.

The device works by employing a combination of accelerometers and motion sensors but there’s one other thing you need to know about the game – turn up the sound! Among the 50 acts contributing to the game’s soundtrack are Green Day, Beck, the Black Keys, Chevelle, NOFX, KRS-One, Modey Lemon, MGMT, Santigold, Superchunk and Wolfmother.